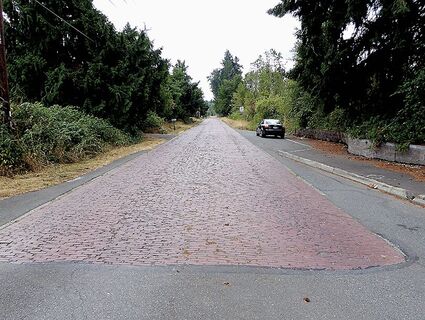 An section of the red brick road north (west highway), where it has has been replaced and covered with asphalt.

On May 29, 1922, Herbert Anderson drove with Elias Gillette from Seattle to Leavenworth. Herbert took photos and documented the trip in a travel journal along the way.

His daughter, Teresa A. Anderson, has the almost 100-year-old photos and travel journal. On our first day of following in her father's footsteps (or wheel marks) Teresa and I had visited bricks of the North Trunk Road in Shoreline. We had continued that day into Edmonds, but Herbert and Elias had turned east to travel to Lake Forest Park where they met Victory Way (think Bothell Way now).

They then traveled east and went via...