Another view on climate change | Letters to the Editor 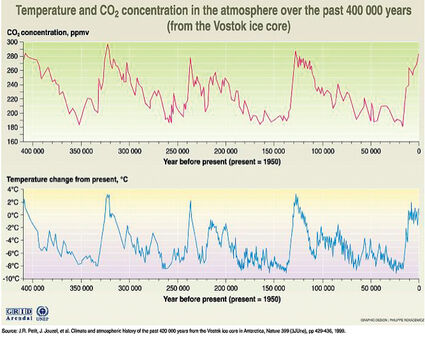 Climate change: It's real, but much is due to natural events

The NOAA graph shown in Greg Ferguson's Sept. 2 Greener Edmonds column, "It doesn't feel like an ice age," gives one view of our current climate situation with respect to history.

Another view is shown at http://www.bit.ly/3n8IpYY, and is also referred to on the NOAA web page.

Note that we have been in a global warming trend for the past 10,000-plus years, and have yet to hit even the lowest peak temperature of the previous four (very similar) major climate cycles.

The peak CO2 was also higher than current in three of the four previous cycles.

So, yes, climate change and "global warming" are real. However, much of that change is due to natural events and climate cycles beyond the control of human technology.

The questions I have not seen addressed in the popular press are: What portion of the current "Global Warming" is due to human causes (burning fossil fuels, etc)?; What is the maximum effect can we have on the current warming trend by reducing such emissions?; and, How much of that reduction are we actually willing and able to actually accomplish, given the cost of mitigation and the resulting economic and social impacts?

The International Energy Agency has assessed what they think we have to do to limit the rise in global temps to 1.5°C – bit.ly/38NJ9KB – we have to reach net zero greenhouse gas emissions by 2050, reduce total energy consumption by 7% from the 2020 level by 2030, and significantly change the way we produce energy: 70% of electricity generated by solar and wind by 2030, and 100% renewable sources by 2050; reduce use of coal by 90%, oil by 75%, and natural gas by 55% by 2030; shift domestic mass transit from air to road and rail; sell only electric passenger vehicles globally by 2035; and the list goes on.

Personally, I doubt we are willing to do what it takes to accomplish even a small fraction of all that. Notwithstanding the estimated $5 trillion a year investment in new energy infrastructure, we continue to tear down hydroelectric dams and replace them with natural gas powerplants.

We resist building wind farms because they are ugly and kill birds. We buy Teslas, but also 500 HP gas-guzzling SUVs. We want to fly anywhere more than 200 miles away. We can barely afford light rail, much less long-distance, high-speed passenger rail.

So, when are we going to ditch the idiotic "cap and trade" schemes that will only enrich the stockbrokers, and get on with the real work of changing the way we live?

Once again Edmonds mayor Mike Nelson has shown his total lack of respect for those who serve his city – this time his newly appointed chief of police ("At last: Michelle Bennett named police chief," Aug. 26).

Mayor Nelson is quoted as saying, "... Ms. Bennett has displayed her community-minded approach to policing that reflects our Edmonds values of safety, care, and compassion."

Obviously, he is grandly underlining his appointment of a woman to lead the Edmonds Police Department. But had he appointed a man to this position, would he refer to him as Mr.?

Chief Michelle Bennett is the police chief, and the only way she should be addressed or referred to is as "chief."

Mr. Mayor, please show her the respect she has earned.