'A sadness couched in hope'

20 years ago, Maynard Atik visited Ground Zero and cried for a friend 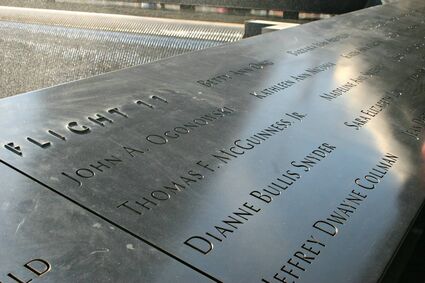 They found 49-year-old Lars Qualben's body in the rubble of the World Trade Center in early 2002.

For pastor Maynard Atik, the discovery of his friend brought a small measure of relief. A member of his congregation – husband and father to two teenage boys – Qualben was a senior vice president for Marsh McLennan on the 100th floor of the north tower, the first to be struck.

Qualben was at work when a terrorist piloting American Airlines Flight 11 deliberately slammed the plane into the 93rd through 99th floors at more than 460 mph, taking the lives of 92 innocents.

They found Qualben's briefcase near his body. He'd lost a lower limb, but was only one of the few among the more than 2,700 killed that terrible day whose bodies were mostly intact when found.

Maynard Atik's Sept. 11 memories – of his friend, the nightmares, the crying jags – arrive on cue every September. So he is not looking forward to this Sept. 11, which marks 20 years since the attacks that brought terrorism home to the United States

For some, watching the events on TV was horrible enough. For others, like Atik, it was real life. He could smell the towers for months.

He is 80 now, 81 next month. Since leaving New York in 2003 for semi-retirement, he has lived with wife Darlene in Perrinville and, for the last 11 years, in a tidy condo on Daley Street near Civic Field.

Atik is tall and lean, and projects a friendly self-sureness that slips into pensiveness and a search for words when recalling 9/11 and its aftermath.

Not recalling is not an option.

In September 2001, Atik and his wife lived in Brooklyn's upscale Bay Ridge neighborhood, in sight of the Verrazano-Narrows bridge and about six miles from lower Manhattan.

Brooklyn-raised, Atik served as an Evangelical Lutheran Church pastor for his home congregation. It was a homecoming for him after serving in the Pacific Northwest, Minnesota, Colorado, and overseas in Norway.

Like many, Atik tuned in to "The Today Show" on Sept. 11. It was just before 9 a.m. when Katie Couric reported that a plane had slammed into the World Trade Center 1. Atik – and many others – briefly thought it might have been a small plane, as pilots occasionally flew close to the city – New Yorkers call it "canyon travel."

Recovering slightly from his initial shock, Atik woke up his son David – a student at the University of Washington and a trained EMT visiting his parents – and told him he might want to head to Manhattan. (His son would spend days there on the "bucket brigade," putting out fires, cleaning out first-responders' eyes, and helping sort through supplies.)

"I guess my initial thought was, Why are we hated so much?" he said. "It was intentional; the World Trade Center was the icon of American business."

Atik's immediate concern was for Qualben. But he soon realized the odds of finding him – or any survivors – were not good.

"We had a memorial service for him at the end of September," he said, reaching for the right words.

The following Sunday, after the service, Atik knew he had to visit Ground Zero with his wife.

"If that's where Lars' remains were," he said, "I thought it fitting to do a kind of a committal, a funeral service."

He remembers the date. Oct. 7.

When Atik and his wife arrived at Ground Zero's periphery, a police officer escorted them to the site, where they recited the Lord's Prayer. Afterwards, all three cried together.

"At that time," Atik said, "there was a lot of conversation over the few bodies that were found. Was there going to be a common grave site added at the site at the World Trade? But it all got put on hold, and Lars' family decided to have an interment ceremony in Brooklyn."

Atik said his memories of 9/11 will never go away. But it wasn't solely the attacks that hit him hard. It was, and remains, like PTSD.

"It's any kind of storm," he said. "And what happened in Florida with that building collapsing? That hit me – all those people. And then mass killings. I have no problem crying in front of people. I don't think that makes me less of a man."

In the aftermath of 9/11, Atik called on his people skills to help those he could. He volunteered as a chaplain with the Red Cross at its Family Assistance Center at Pier 94 on the Hudson River. It distributed financial assistance – about three months' worth – of food and housing, utilities, and salary support, he said.

When the center closed, Atik felt he was still needed. It turns out that St. Paul's Chapel – the historic 18th century church across the street from the World Trade Center – needed a chaplain. He ended up at St. Paul's until the Ground Zero site closed in May 2002. At a closing ceremony, he helped transport the last beam of the fallen buildings from the site. The beam is housed in the 9/11 Memorial & Museum.

"There was communion service at St. Paul's at noon for anybody who wanted it," Atik said. "I called it 'holy commotion.' People were coming in and out, staying late, sitting and sleeping in the pews."

At one area – which Atik called a "pew pod" and where George Washington prayed after being sworn in as president, volunteers tended to the feet of those working at Ground Zero.

"People were still working in the pit, as it was called. A podiatrist would take care of burned feet, and cobblers would resole their shoes."

Atik said his role was simply to be available, to sit with people, and to listen.

"One of the things that chaplains do, and it's specific and intentional, is called the ministry of presence. We're not there to proselytize, we're not there to get someone to faith. We're there to listen, and to be available to hear what they have to say."

Atik knew these people. He grew up with New York cops and firefighters.

"But these guys, the way I describe them is having sad eyes. I would encourage them to go talk with somebody, but they didn't want it on their record. I said, hell, that's bullshit."

"This one construction guy," Atik said, "just quietly walked up to the front of the church, the chancel, with his hard hat under his arm. And he started singing 'My Life Flows on in Endless Song.' And 'How can I keep from singing' is one of the verses. He finished, and there was no applause. People just sat and listened."

At home in Edmonds

Atik was a pastor for more than 22 years in Puget Sound, so returning to Edmonds was a reunion of sorts. Plus, his wife is from the area.

Atik still heeds his religious calling. His title is "transition pastor" at Central Lutheran Church – which has resumed in-person services – on Capitol Hill across the street from Cal Anderson Park.

It was there, last September, where vandals caused considerable damage to the church in the wake of the riots. "We had a bunch of our windows broken," Atik said.

Through all his trials, it's clear that Atik's faith has sustained him.

He carries on, even through the tears. 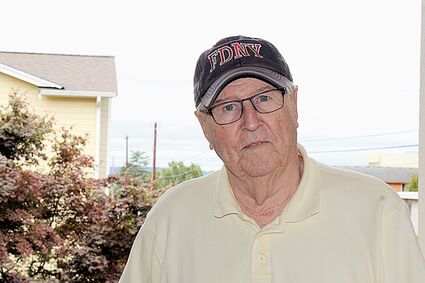 Maynard Atik in his Edmonds home: "I guess my initial thought was, Why are we hated so much?"

"I cling to the promise that I am dearly loved and treasured by God, and that will never be taken away. I'm able to sense that presence wherever I go, especially in hard times. One of the things that Darlene has a hard time hearing is that I will probably be forever sad, in one way or another, but it's a sadness couched in hope."