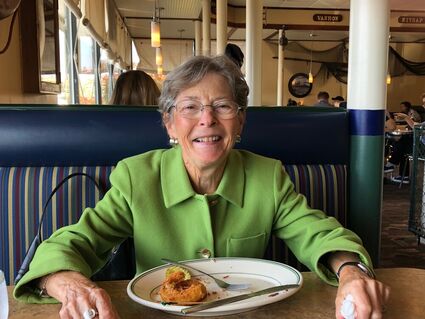 With her husband Bill beside her, Linda Sue Green Toskey died peacefully at home in Oro Valley, Ariz., on Aug. 8, 2021.

Born in November 1940 to Fred and Carol Green at Wright-Patterson Air Force Base in Ohio, Linda and her sister, Molly, along with their cocker spaniel, Blondie, spent most of their childhood in suburban Maryland near Washington, D.C., but her father’s military career also took them to Wiesbaden, Germany, and Bagyo, Philippines. Linda graduated in 1958 from Suitland High School, where she was a cheerleader captain and yearbook editor, and then attended Frostburg State College. Across the miles and years, Linda and Molly remained very close and spoke weekly on the phone, sharing each other’s challenges and triumphs, as well as their mutual love for antiquing and fuzzy dogs.

While attending high school, Linda began corresponding with Bill Toskey, a West Point cadet from Oak Harbor, Wash., at the suggestion of a mutual friend. A year later, the two actually met and chose to continue their unusual courtship with letters and weekend visits between New York and D.C. Then, on the eve of her family’s move to the Philippines, Bill asked Linda to marry him. She accepted and left the next day for Bagyo, returning shortly before their wedding on March 26, 1960, in Des Moines, Wash.

After a brief honeymoon, the newlyweds drove across the country and flew to Munich, Germany to start their life together. There, Linda and Bill formed many friendships that have lasted a lifetime; the Munich friends still gather annually. In 1962, their first child was born, so they drove to Sweden to visit Bill’s extended family for Christmas. What grew to be 61 years of marriage was off to an adventurous start!

Bill’s career took the family many places, including all 50 states and several countries in Europe. They lived in Illinois, Washington, Virginia, Arizona, Kansas, Mississippi, Norway, Germany, and Alaska. Linda was a true “Army wife,” able to make a comfortable home with every move, no matter the circumstances. She went out of her way to make sure everyone’s needs were attended. While every place held special memories, living in Norway was uniquely impactful, and Linda and Bill continued to occasionally communicate with each other in Norwegian.

Linda was also very active in church leadership and ministries. She was the first woman to serve on the church council in Norway, and subsequently served as council president for four different congregations. Linda became increasingly involved in synod and national church leadership which led to her being an envoy to China for the Lutheran Church (ELCA) in 1981, making Linda among the first American women to visit China after its cultural revolution. Outside her home and church, Linda also developed a special talent for managing the front office in medical/dental practices.

After more than 35 years, Linda and Bill returned to Puget Sound in Mukilteo, Wash. where they lived for 23 years – the longest they lived anywhere, and hosted countless gatherings, which are fondly remembered for Linda’s warm welcome and remarkable cooking. Linda also nurtured a beautiful garden full of blooms, birds, and butterflies. Then in 2017, Linda’s love of sunshine and her special fondness for Tucson took them to Oro Valley, Ariz., from where they continued traveling across the country to visit friends and family.

Linda was famous amongst those who knew her for many things: homemade fruit pies, onion rings, fried chicken, and dill pickle coleslaw; a love of antiques and handicrafts, as reflected in her home decorating; her put-together appearance; her lifelong search for a good haircut; a penchant for “sharp, buzzy” beers; irrepressible back-seat driving; thoughtful handwritten notes; finding and sharing four-leaf clovers; dancing with Bill; her endless appreciation for mountains, birds and wildflowers; and her deep, abiding faith in God and love for all people. Her talent for homemaking, green thumb, love of nature, hospitality, hard work, grit, organization, thrift, humility, temperance, honesty, courage, wit and wisdom, beauty, and kindness will live on in the example of gracious womanhood she modeled for her children and grandchildren.

Friends of Linda and the Toskey Family are invited to her memorial service on Saturday, Sept. 4 at 2 p.m. at Pointe of Grace Lutheran Church in Mukilteo; also available via live broadcast: https://www.youtube.com/channel/UCuKeMI798HMdwNrQM_nu_6Q. A Celebration of Linda’s Life will follow at Rosehill Community Center at 4 p.m. Memorial gifts in lieu of flowers are directed to Pointe of Grace Lutheran Church: https://pointeofgrace.org/