In Edmonds: 'Utter disrespect for the citizens' point of view' 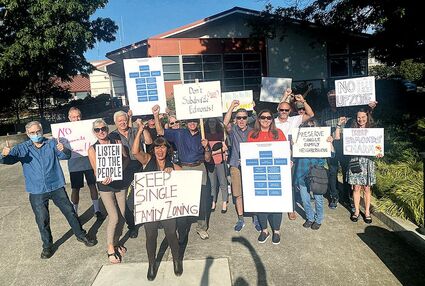 Citizens rallied outside Edmond City Council chambers on Tuesday, speaking out against housing recommendations, a portal to report discrimination, and other issues.

Mayor Mike Nelson and city councilmembers got two hours of comments – frequently heated – from citizens at Tuesday's council meeting, many expressing their frustration at the Edmonds Citizens Housing Commission's recommendations that could bring more density to the city that consists primarily of single-family housing.

The full audience at the City's second hybrid meeting – both in council chambers and online – was delayed for more than 40 minutes due to technical issues (the meeting had to switch to Zoom as it could not be seen on TV or on the City website), filling an already pac...

I thought it was good. A breath of fresh air to me. To see people speaking with such passion. To hear the intelligence we possess here in Edmonds. Yes I liked it a lot. I thought the Mayor did a good job too. I never give him a thumb up but I thought I saw him listening also Ms Johnson.. I like her. I think she is real. I think we can trust her to compromise. I am not going to say anymore. Everyone saw it everyone knows. I saved it haha.