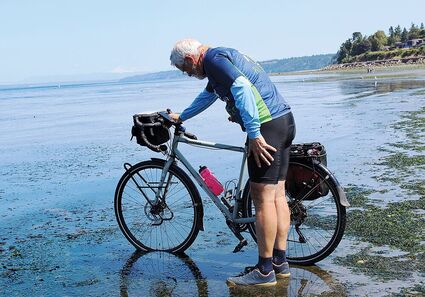 As Steve Ball walked his bicycle over the wet sand and seaweed toward Puget Sound on July 26, he raised a fist in triumph before dipping the bike's front tire in the water.

His extended family stood close by, recording the moment on Zoom for those who couldn't join the end of his cross-country journey ending on the Edmonds beach next to Brackett's Landing North jetty.

It was the end of a 77-day ride that Ball planned for 2020, but delayed due to the pandemic. It started May 10 at Belfast Harbor in Maine; he and wife Allane live in the small central Maine town of Windsor.

The journey included 66 miles of riding his Kona Sutra bicycle and 11 days of downtime.

"I would ride six day, then sort of recover," said the 66-year-old. "I could tell when I didn't take a down day. I started to slow down."

Although the ride – which Ball estimated at about 4,000 miles – was a solitary endeavor, it wasn't a lonely one. His wife accompanied him on the ride.

"I drove the truck," she said. "We sometimes camped, but mostly stayed in motels. Steve would leave early in the morning to avoid the heat of the day. I would pack up the truck and cover the same route unless he was on a bike trail. "

"I would try to get to our motel, and get checked in, so all he had to do was come in," said Allane. "A cold drink, a shower, and a rest was all he wanted at that point. There were some places during the trip that I would hopscotch him, driving about 10-15 miles ahead and waiting until he caught up, just to make sure all was well. This was in very rural areas where there was no phone signal, few other travelers, and high temps with no shade. But he did great."

As you might guess, Bell is fit. The retired Army man – 28 years – was a runner before switching to swimming and cycling. Last year, he cycled from the Canadian border to Maine's southern tip, and has biked along the Erie Canal.

For his cross-country ride, Ball hooked up with a group called Adventure Cycling, which claims to have mapped more than 50,000 miles of bike-friendly routes nationwide. He mapped his route with the help of a small Garmin Edge GPS device. He stuck to the far right on secondary roads ("I'm overly cautious"), but occasionally had to traverse larger roads, including in Montana.

He replaced two tires and four tire tubes during the ride.

Although Ball occasionally had to duck in and out of traffic, he said his trip was accident-free.

He saw plenty of sights.

"I must tell you that having gone over the Appalachian Mountains, the White Mountains in New Hampshire, and the Green Mountains in Vermont, some of those views were really spectacular," he said.

"But the view that I was so struck by was coming into Washington and the Cascades. It was fantastic – it blew my mind. I don't even know how to describe it – the mountain peaks."

Ball's plan was to ride Highway 20 through the north Cascades, but the fires near Winthrop forced him down State Route 97 through Chelan and Wenatchee, where he turned west to begin his final stretch on Highway 2 along the Wenatchee River.

"I came through Leavenworth, and that was just stunning," he said. "But in some places it's pretty challenging on a bicycle. You've got traffic going 65 or whatever, and you've got a shoulder like this".

He squeezed his hands together.

"I had one day where I climbed 20 miles," he said. "That was a bit challenging."

Steve and Allane Ball live in Maine, but son Benjamin and family live in Puyallup. Allane's maiden name is – wait for it – "Brackett." George Brackett is acknowledged as the founder of Edmonds, although Indigenous peoples had frequented the area for years.

Ball's plan took him over Highway 20 and into Anacortes, but the Cub Creek and Cedar Creek fire changed that.

"Since Ben and family live in Puyallup, it was convenient to come across Stevens Pass and into Snohomish," Allane said. "He was looking to dip his tires into the water on this side of the country, so I just looked at the map southwest of Snohomish.

"My 97-year-old dad and 91-year-old mom, Allen and Margie Brackett, have followed our progress closely, asking often if we could see the ocean yet. So when I spotted Brackett's Landing on the map and saw there was beach access, I knew that had to be the final destination." 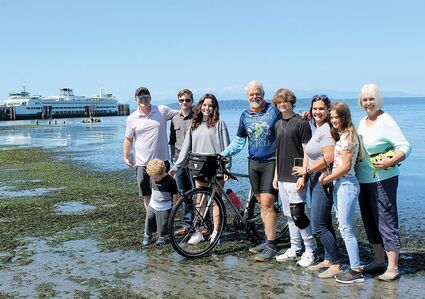 The Bracketts arrived in Rye, N.H., in the late 1690s. They later became prominent in the Portland, Me., area. George Brackett was born in eastern Canada. Could there be a link?

"We have an extensive genealogy, but unfortunately it is at home in Maine," Allane said. "I am anxious to look at our genealogy to see about any possibility of being related to George Brackett."

(If there is, look for a Beacon update, of course.)

What's next for Ball? He said he hasn't decided, and just wants to spend the next few days with his Puyallup family.

His wife will be the first to know.

"I am so very impressed with my husband's commitment and grit," said Allane. "He always says, 'I just put my head down and pedal,' but he did it day after day with unfailing enthusiasm. Steve loves to keep moving. I can't imagine what challenge he will dream up next."