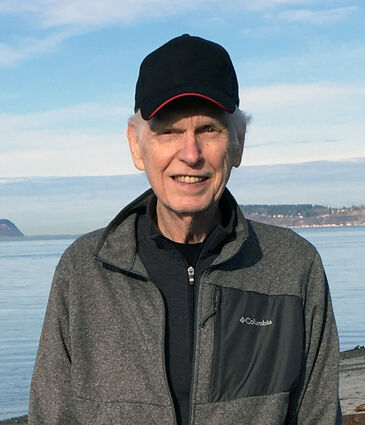 Bill was born on January 6, 1938, in the western Pennsylvania town of Aliquippa. Always a hard worker, his first job was at age 10 as a golf caddy, and he worked his way through college at the Jones & Laughlin Steel Corporation. In 1961, he graduated from the University of Pittsburgh with a degree in mechanical engineering.

Bill married his college sweetheart, Kathleen Collins, in 1961. The couple moved to Seattle, where Bill began work at Boeing. He later worked at the Lockheed Shipbuilding and Construction Company and spent 26 years at the Port of Seattle (both waterfront and airport), where he received multiple awards for his management skills.

While working full time, he got an executive MBA from the University of Washington, obtained his Professional Engineering license, and helped save an Oso elementary school building from demolition. He retired as the director of Facilities and Maintenance at Sea-Tac in 1998.

Before retirement, Bill volunteered with the Special Olympics, youth sports teams, the Kiwanis, and the Chamber of Commerce. He and his wife, Katie, then moved to Edmonds, where he also volunteered at local elementary schools, his church, the Montclair condominium HOA board, and the Edmonds Historical Museum.

He received a Volunteer of the Year award in 2000.

Bill enjoyed hiking, fishing, skiing, golfing, painting, camping with family, and traveling to all parts of the world with Katie. Bill also loved dealing in small antiques, particularly coins, tools, and scientific equipment. His easygoing demeanor and kindness to others won him friends everywhere.

Bill called his surviving wife of 60 years, Katie, the love of his life, and credited her for many of his accomplishments. He was also proud of his two sons, Bill (Françoise) and Dan (Erica), and his three grandsons, Leo, Greg, and Marco.

Bill passed away peacefully at age 83, surrounded by family, on July 7, 2021, after a hard-fought battle with cancer. We all miss him very much.

Friends and family are invited to remember Bill at a celebration of his life to be held on Saturday, Aug. 7, from 11 a.m. to 3 p.m. at the Edmonds Waterfront Center, 220 Railroad Ave.

In lieu of flowers, the family requests donations to the Edmonds Historical Museum (historicedmonds.org) to celebrate Bill's time volunteering there.