Explosion: Burner was turned to 'high' 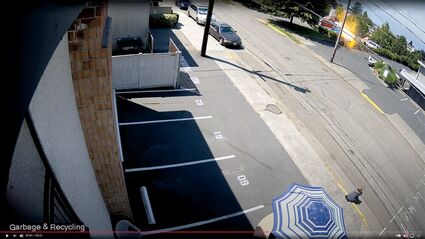 The Edmonds Beacon has obtained a copy of a surveillance video that shows the moment a U-Haul van exploded July 6 in the Edmonds Center for the Arts parking lot. Go to 39:38 for the explosion: www.bit.ly/3wXBmUf. The video is from a public records request filed with the Edmonds Police Department.

What caused the explosion of a U-Haul van July 6 at the Edmonds Center for the Arts parking lot, a blast so loud it was heard – and felt – throughout much of downtown?

Watch exclusive video of the explosion, at 39:38.)

Although nothing definitive has been confirmed, Michael Collier, a Bureau of Alcohol, Tobacco, Firearms, and Explosives agent and explosives expert, said it was accidental and could have been the result of several factors.

According to an Edmonds Police Department report, among the items inside the van were four propane tanks, a lap...

Well hum!!! I don't know quite what to make of this..I do think if the Ferry system is to remain safe...all vehicles should be checked for just this sort of thing. All meaning longer times yes thats true... But its better than what could happen. All Vans, Anything you cannot see well should be checked. Trunks. or get some explosive sniffy dogs down there that could help I don't know. But the whole thing has seemed off to me from the beginning.