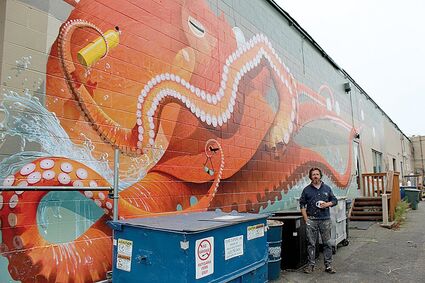 Andy Eccleshall's octopus mural can be seen on the west side of Salish Crossing.

It's the second mural from Eccleshall visible to those arriving or departing from Edmonds Station or for those turning their heads on the west side of the railroad tracks.

The first, just south of the new one, reads "Welcome to Edmonds ... You've reached your destination."

Eccleshall's latest concept came from the proximity of the waterfront and the dive park.

"Hopefully, this one brings some smiles to peoples faces," he said. "This is a fun, animated concept with...