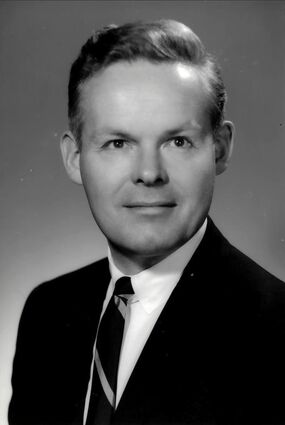 Leif Hauge was born Jan. 23, 1925, in Oslo, Norway, the son of Hilmar and Margret (Lund) Hauge. Leif was a witness to history when, at age 15, the Germans invaded Norway in April 1940. Living for five years under occupation left a lasting impression on Leif.

After the war, Leif served in the Norwegian Navy. Leif legally came to America in November 1948 aboard the ship Stavangerfjord, where he became a citizen five years later.

Leif's career started with the Scandinavian Airlines company (SAS), working in weights and measures at Idlewild airport (later renamed JFK) in New York City, and ended with his retirement from Swissair as Regional Sales Manager in 1987. Aviation was not just Leif's profession, but also his hobby. Leif obtained his private pilot's license and attended air shows throughout his life.

Leif spent most of his life in Edmonds, where he enjoyed boating on the Puget Sound with friends, socializing at Chopsticks with members of the "Round Table," and visiting the gang at Starbucks every morning. Leif was a longtime member of the Sons of Norway, Elks, Skal, and the NRA.

Leif was an avid fan of Seattle Seahawks football and the Olympics. He was a world traveler, covering nearly all of the major countries in Western and Eastern Europe, Australia, South Africa, Japan, and Israel, but it was America he loved. Leif was proud to be an American and displayed a flag nearly every day of his life. Leif's ashes were buried at sea in the Puget Sound halfway between Edmonds and Kingston on July 21, 2020.

Leif's wartime experience made him a lifelong Republican because of the party's pro-defense positions. He was proud to say that he voted three times for Richard Nixon for president and thought Ronald Reagan was the greatest president of his lifetime.

Leif was fond of saying that, "All the social programs in the world don't mean a thing if you are living in an occupied country."

Surviving are his ex-wife, Carolynn, and their children John and Christine (Wolsek). Leif is also survived by grandkids Laura (Cleveland) and Natalie Hauge of Mount Zion, Ill., and Olivia, Thomas, Andrew, and Michael Wolsek of Trenton, Mich.