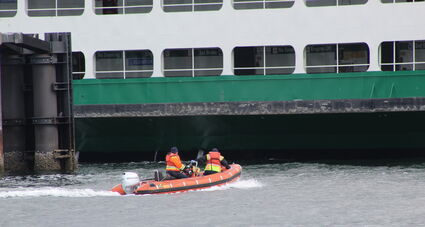 Ferries on the Edmonds-Kingston trip have made numerous rescues of scuba divers near the Edmonds dock.

On Friday, June 18, crewmembers successfully rescued three of a quartet while wondering where the fourth one went.

Diane Rhodes, a spokesperson for Washington State Ferries, that it was between 11:30 p.m. and midnight when the captain of the Walla Walla, from high in the wheelhouse as the boat slowly approached Edmonds, spied a diver in distress under the dock's north side.

He radioed staff, who quickly launched a rescue boat and pulled him in. But that was just the beginning.