Pride on display this month at City Hall

For the first time, the City of Edmonds is officially recognizing June as Pride Month 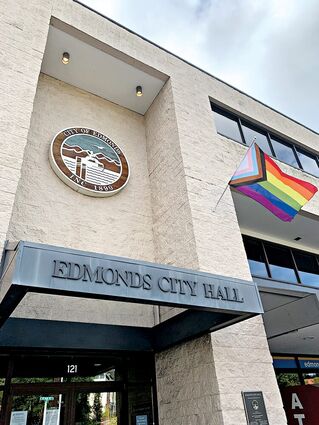 A pride flag flies over the entrance to Edmonds City Hall.

City Hall is looking a bit more colorful this month thanks to the rainbow stripes that make up the LGBTQ+ pride flag on display outside its front entrance.

This is the first year the City of Edmonds has hung a pride flag at City Hall.

Held in June, Pride Month commemorates the Stonewall rebellion in New York City on June 28, 1969, generally considered to be the start of the gay rights movement in America.

The Pride flag display coincides with the major step being taken by City Council this month to recognize and openly support the LGBTQ+ community in Edmonds. Prior to 2021, Edmonds had n...