Entries needed: An Edmonds Kind of 4th could be canceled 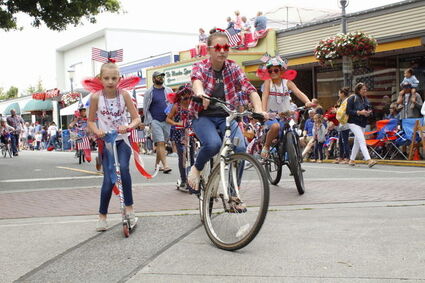 The Edmonds Chamber of Commerce, which announced June 1 that it would attempt to produce the parade and fireworks this July 4, now says the parade could be canceled due to a lack of groups who have signed up to march.

"Pandemic-induced price hikes on everything from portable toilets to paying police holiday overtime are adding an increasingly heavy burden on producing the events this year," said President and CEO Greg Urban.

The chamber is facing additional tens of thousands of dollars on top of usual event costs to produce the July 4 events. While the "An Edmonds Kind of Hero" campaign raised the necessary funding to keep the chamber alive through the pandemic, reserves still do not exist to cover these unexpected extra costs.

As of Friday, June 11, only 15 groups have registered to march in the parade, much lower than the typical 80 to 100 entries.

The extra expenses coupled with low entry numbers are forcing the chamber to consider whether it is feasible to move forward with the parade in three weeks.

"Ultimately, a decision needs to be made on whether to call off the parade," said Urban. "In order to not lose valuable resources on equipment and supply deposits, the chamber needs to have a minimum of 40 registered parade entries by Monday, June 21."

Urban did point to one bit of good news: volunteers.

"One of the event's major hurdles, securing enough volunteers for the day's events, is accomplished," he said. "The community heard the cry for help and responded, The chamber is extremely grateful to everyone who stepped up and signed up to ensure that the necessary volunteer coverage is met."

– If you are a part of a group, business, or club that is on the fence about registering to march in the parade, register as soon as possible. Urban said many groups the Chamber reached out to are hesitant, as they won't have time to create a fancy float or have a large group of people marching.

But those aren't need, he said.

"The community wants to celebrate you, even in a stripped-down presentation. The chamber is encouraging our 2021 high school grads, religious groups, nonprofits, sports teams (even Little Leagues), neighborhood groups, and all types of businesses to register."

– Donate to the Edmonds Chamber to help cover the unexpected cost increases of the day's events. Even if the parade cannot happen, the 5K race and fireworks still require vendors, equipment, and police overtime to produce.

– Register to participate in the parade: http://www.EdmondsFourth.com

– Donate to the Edmonds Chamber: edmondschamber.com/support-edmonds