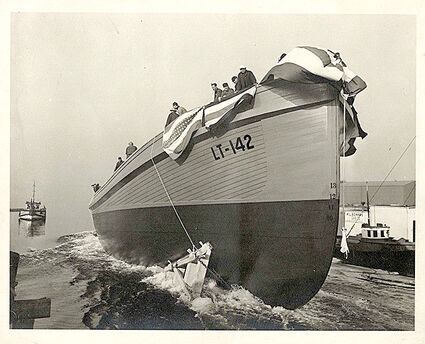 While I was doing some much overdue cleaning at my house, I found a series of photographs from the boatyard where my father had been superintendent during World War II. I was delighted to see the pictures because I thought I had lost them.

During World War II, my father was at Barbee Marine on Lake Washington near Kennydale toward the south end of the lake. The Seahawks' VMAC is now near the location.

The photos were taken by Ray Krantz, who had an address in Ballard. One tugboat, LT-142, and several barges in various stages of construction are shown in the photos. I know that my late mother was the sponsor at one launching, but I don't know whether it was a tug or a barge.

The sponsor, almost always a woman, is the one who breaks the champagne bottle on the bow to christen the vessel.

The tugs and barges built by Barbee Marine were all constructed of wood. There were many steel vessels built in the Puget Sound area as well, including the famous USS Johnston (DD-557), which had dared, of necessity, to attack much more powerful Japanese cruisers and battleships at the Battle of Samar in October 1944 in order to protect the small aircraft carriers Johnston was charged with defending.

The Johnston was sunk in that battle, and her skipper, Ernest Evans, was posthumously awarded the Congressional Medal of Honor. The wreck of the Johnston, the deepest wreck ever located, was found in March 2021 at a depth of over 21,000 feet.

The vessels built at Barbee Marine weren't steel like USS Johnston, but were built of wood because wood was what Barbee was familiar with, and because the use of wood put less of a strain on scarce strategic resources.

One of the photos I found shows the launching of tug LT-142. I didn't know what the designation "LT" represented. The "T" was obviously for tug, but I couldn't find that designation in Navy information.

That particular launch had also been important because it used in a war bond ad during 1943. Teresa A. Anderson found the ad while doing research to help me.

This type of tug was ocean-going, 127 feet long, and tipping the scales at 283 tons, according to shipbuildinghistory.com. My dad told me years ago that this was a Miki Miki-class tug, able to tow heavy cargoes to very distant ports.

The last time I was in San Francisco I visited portions of a similar tug on Pier 39.

LT-142 wasn't a Navy tug, which is why I couldn't find a Navy designation for LT. I had known for 60 years, but had forgotten that these vessels were not built for the Navy. A poster on Facebook gently reminded me that LT was an Army designation for (L)arge (T)ug.

The tugs and barges built by my father and his crew were built for the Army, not the Navy. During World War II, the Army ran its own navy. The units built at Barbee Marine were sent to the Aleutians Campaign in Alaska.

I presume that the Army had units built in other parts of the country for use in other locations where the Navy just couldn't be trusted by the Army to get the job done right.

According to shipbuildinghistory.com, some of the tugs built at Barbee Marine had relatively short lives. One ran aground in the Aleutian Islands shortly after the war and was lost. Another grounded and sank in Oregon in 1951. Yet another also grounded in Oregon in 1960.

But some led full lives, and were active for many years. At least two were abandoned in Vietnam after the U.S. military pulled out. Three of them joined the Foss fleet. One other became a Sea Scout vessel.

One became a houseboat, but sank in Seattle in 2005. One is listed as still operational as a private yacht named "Justine."

I don't know if the Army still operates its own navy, but the vessels built locally during World War II served to help win the war, and almost nobody remembers that the Army ran its own navy as a part of the war effort.