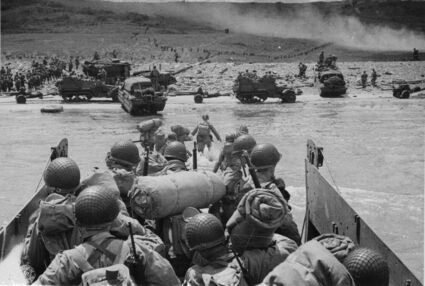 "D-Day From the Boat," courtesy of Kathy Panatone.

"The American Cemetery at Colleville-sur-Mer, France, is located on a bluff overlooking Omaha Beach and the English Channel," Fenwick wrote.

"It contains the remains of 9,388 American military dead. The cemetery contains the graves of 45 pairs of brothers (30 who are buried side by side), a father and his son, an uncle and his nephew, two pairs of cousins, three generals, four chaplains, four civilians, four women, 147 African Americans and 20 Native Americans.

"East of the memorial lies the Wall of...