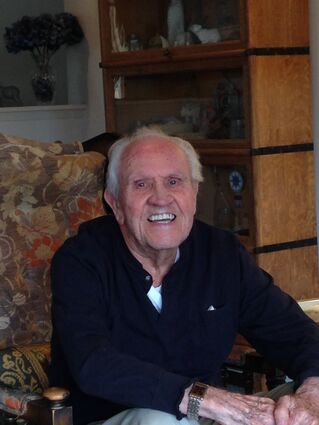 Sidney Baron Casey passed away Tuesday, May 18, 2021, at Sunrise of Edmonds. Sid was born on January 20, 1923, to Robert and Josephine Casey in Seattle.

Sid was fortunate to have two wonderful women in his life. After his first wife, Alice, passed away, he met and married Verle. Verle also preceded Sid in death.

Sid was an avid world traveler with both wives and enjoyed fishing. He grew up in south Seattle and graduated from Franklin High School. Sid spent many years in Edmonds and was active in the community. Sid at a very young age worked in a shipyard as a ship fitter. Sid acquired seamen’s papers and had a specialized rating of CR (butcher). He joined the Merchant Marines and served in World War II.

Sid continued to climb the ladder as a meat cutter and became very active in the union. Although Sid held several exceptional positions with the union, he became the president and executive officer of the UFCW Local 81.

Sid always had a strong work ethic. One of his favorite quotes was from John F Kennedy: “ONE PERSON CAN MAKE A DIFFERENCE, AND EVERYONE SHOULD TRY.”

At Sid’s request, there will be no funeral service. Rest In peace, dear Sid.

I will always remember you Sid! Your general upbeat nature made everyday events a lot of fun, from walking, to enjoying the sights and events of Edmonds, to socializing with family and friends, to holiday celebrations. Your concern for civil rights and social justice was a core part of your life energy, you gave resources and support to many great organizations! Thanks for the good times, rest in peace Sid.