Through Your Lens | Anna's hash it out 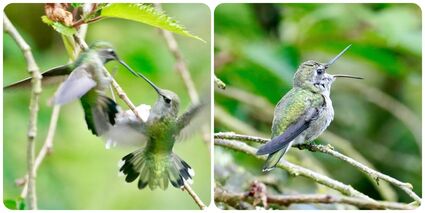 Henry Draper got these great shots of a couple of female Anna's hummingbirds on a cherry tree in his Maplewood backyard. "

First the fight," he wrote. "Then the trash talking."

Unlike the male with its iridescent red crown and throat, the female only has spot of red on its lower throat.

Familiar around Edmonds, Anna's hummingbirds are the official bird of Vancouver, British Columbia.