'Homewaters' is our home, too

David B. Williams explores the human and natural history of Puget Sound 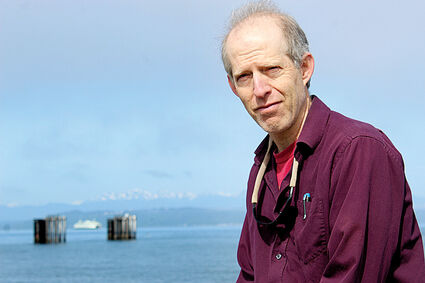 David B. Williams at Brackett's Landing South in Edmonds: "One of the great things about living in a community with a ferry system is that you can have that access to this amazing body of water."

Edmonds is mentioned only in passing in a new book by Seattle author, naturalist, and educator David B. Williams titled "Homewaters: A Human and Natural History of Puget Sound" (University of Washington Press).

But Williams raises several salient points bred into the city's DNA: the role of ferries; the transition from boathouses to fishing piers; the influence of Indigenous peoples; the relatively new view that Puget Sound should be enjoyed rather than used as a resource; and the role of fish hatcheries, daylighting creeks, and the important connection between salmon and orcas.

Williams will be interviewed by artist and author Tony Angell 6-7 p.m. May 26 in a virtual conversation sponsored by the Edmonds Bookshop. To view: facebook.com/EdmondsBookshop/events.

The following is a lightly edited version of a Q&A with the author.

Beacon: You write about the negative influence of fish hatcheries, an important topic in Edmonds, as we have the Willow Creek Salmon and Watershed Education Center in town.

Williams: That was a particular conversation formed with biologist Jim Lichatowich ("Salmon Without Rivers: A History of the Pacific Salmon Crisis"), who has written extensively about salmon. It's making the point that the hatchery system was developed for an economic basis and not an ecological one.

It gets back to a theme in the book of life histories, and how species have adapted to their place; salmon are superbly adapted to their individual streams. They really exemplify the title of the book, "Homewaters," that these are species that have evolved for their homes, for their streams, and yet we sort of would move them around without thinking about the importance of that life history and the different species having life histories.

Each of them are specific to a place, so that's where the hatchery system doesn't really meet that ecological story.

Beacon: Following up on that point, Edmonds eventually plans to daylight – or uncover – Willow Creek so salmon can more easily transition from saltwater to freshwater in their efforts to spawn.

And I think we sometimes forget that when looking at the beautiful waters of Puget Sound, there's all those streams, all those creeks, that feed the Sound and are essential to the health of Puget Sound. So if we improve the freshwater habitat, we are also improving the saltwater habitat. Daylighting (Willow Creek) is so critical.

Beacon: You write that the health of Puget Sound has improved, mostly through regulation and the recognition of climate change. But you mention that "the effects on human activity – overfishing, pollution, and climate change – reach deep beneath the surface."

Williams: I'll answer in a sort of a chronological perspective. Climate change is obviously the big one for the future that we're wrestling with. Certainly, we are experiencing climate change right now. It's an issue that's just going to continue to go forward.

Overfishing is really the early story of Puget Sound in terms of how we exploited the Sound; pollution is the middle story. That's the one we really changed when we started with the pulp mills (Editor's note: Edmonds had many shingle mills on its waterfront; the last closed in 1951.) And then what we're doing with driving cars, all of us being part of it.

Beacon: You write that Indigenous people understood the relationship between harvesting and preservation.

Williams: There are two parts to that. One, I really wanted to try and include as many voices as I could. And the Indigenous people of this area are far too often left out of histories. We all know that. The classic Puget Sound story is that George Vancouver discovered Puget Sound in 1792. Well, we know that people lived here for thousands of years.

And second, it's important that salmon were and are a group species; there's multiple varieties that people relied on for thousands of years. And they understood that humans do have an impact, and that you need to think about it sustainably. There was, for example, the first salmon ceremony (that celebrated the arrival of the salmon run).

That was important, because you didn't harvest before that, when salmon were not in the prime of their lives. It was very much this understanding of the ecology of the species, and the respect for the species in terms of how they would harvest them. It was a relationship that required humans to act in a way that was about sustainability and not about exploitation.

Beacon: You devote a really interesting chapter to what you call "The Maritime Highway," which includes everything from canoes to the transition from the "mosquito fleet" ferries to today's modern boats run by Washington State Ferries as part of the state Department of Transportation.

Williams: Riding the ferry is one thing I think people in Edmonds appreciate for the spiritual aspect of it. Not in a divine way, but just appreciating being out on the water. One of the great things about living in a community with a ferry system is that you can have that access to this amazing body of water.

Beacon: You have studied geology, and you wrote a book called "Stories in Stone: Travels Through Urban Geology." You write about the geology of Puget in "Homewaters," and point out it wasn't really glaciers that carved the Sound (at least seven times in the past 2 million years) but the waters underneath.

Williams: As the ice moved in, you get two layers of sediment-rich water that forms in front of the glacier as it moves along, cutting deep into the land below. You could have a lot of water on the order of a Skagit River flowing underneath that ice.

So it's a combination of water and ice coming down into the Sound and carving it out.

Beacon: One of the benefits of your book is that people can use it as a jumping off point for more knowledge and, possibly, action. Is there anything that people who watch the presentation or read your book can do?

Williams: I would say it's not an activist book; it's not a book trying to tell you things to do. But you can sort of think about it on different levels. Why is the Sound in better shape? Well, the Sound's in better shape because of regulations, in part. And so, from a regulatory point of view, one way to be involved is to vote for candidates who believe in climate change and recognize the importance of working to try and create a better solution for climate. 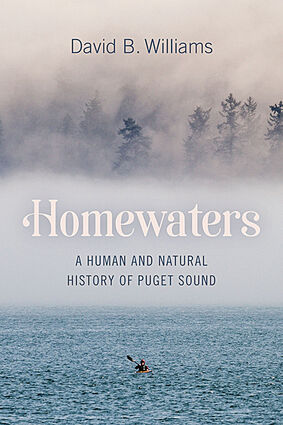 Another way is contributing to proactive organizations providing sustainability and stewardship to the Sound.

And this is a really critical point – getting out there, knowing the Sound, and developing a relationship with it. One of the highlights of the entire book was the day I spent down in Seattle at Discovery Park watching the tide change during a 12-hour period.

To me, that's so part of being present in a landscape – to observe it, to watch it, to be passionate about the plants and animals. We all know that the stronger relationships we have with a place, or an animal or a person, the more concern we have, the more we are focused on being better citizens of that place.