Nonpartisan solutions? New group to give it a try 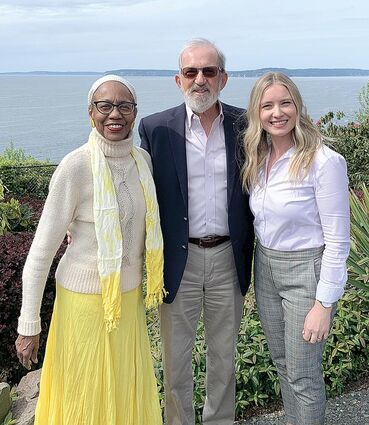 But a new grassroots organization with the optimistic moniker of Edmonds Civic Roundtable hopes to unearth nonpartisan solutions to "empower Edmonds neighbors, organizations and government to work together to solve problems in a genuinely collaborative, equitable and nonpartisan manner."

"This will take work, and will require us to hold each other accountable for what we say and what we do," said board president and former Edmonds City Councilmember Tom Mesaros.

"I could not tell you which is which, or who is what, but I do know I have been a Democrat my whole adult life, though when I was on City Council, several of my fellow councilmembers accused me of being a Republican."

But, as an organization, Mesaros said the new group is committed to keeping Edmonds government nonpartisan.

"As I like to say," he said, "there is nothing partisan about good roads, good sewers, clean water, nice and safe parks, and good public safety. We all want that for our city."

ECR does not advocate for specific outcomes regardless of how individual members might feel, Mesaros said, adding that it exists to advance informed and collaborative decision making.

"We believe sound decisions will come from a sound decision making process," said Mesaros, who became a member of Edmonds City Council in 2014, filling a seat left vacant after Councilmember Frank Yamamoto resigned. He then won a four-year term in 2015, but in early 2019 announced he would not seek a second term.

Political insiders in town are aware of a group called Edmonds Good Government (EGG), which Councilmember Adrienne Fraley-Monillas, in a 2019 letter to The Beacon, described as "the old guard, predominately white, wealthy, and connected to others of the same."

The Beacon asked Mesaros about EGG and the perception from some that it works against the "Seattlefication" of Edmonds.

"I don't know all that much about EGG," Mesaros said. "I was on their mailing list, but never was active, nor did I attend any of their meetings. Several of their members now belong to Edmonds Civic Roundtable, but in the meetings I have been leading as the organization's president, I have not heard 'Seattlefication' mentioned once."

Karen Shiveley is an Edmonds CIvic Roundtable board member and listed as a EGG member in Fimia's response to Fraley-Monillas.

Both Mesaros and Shiveley were among the citizens who signed a petition – "Drop the Mike" – which called for Mayor Nelson to step down because of claims he wasn't transparent about the hiring of Sherman Pruitt as police chief, followed by the decision not to hire the police chief of the Sauk-Suiattle Tribe.

"There are more than enough examples globally, nationally and regionally of how decision-making should not take place," Shiveley said.

"We have seen what happens and felt the impact of a divisive process when leaders are unable and unwilling to face the challenges of working across their differences. We strive to rise above any existing policy body or individual. We believe that the people of Edmonds can and will do better than that."

Mesaros said all Edmonds Civic Roundtable are being held on Zoom now and in the near future due to the pandemic.

"We have committee meetings throughout the month, a monthly board meeting, and a monthly membership meeting, all on Zoom. Once the pandemic has concluded, we will of course switch to in-person meetings."

What will the group do with its findings?

"Once we tackle an issue and have facts to publish, we will do so through our membership meetings, potential public forums, a future newsletter, and also future white papers that publish facts surrounding particular issues," Mesaros said.

He added that the complexity of life and the scale and range of problems are increasing exponentially.

"The issues we face are more challenging as is the knowledge required to deal with them. Even for those individuals who bring experience, strong moral character and good intentions, the importance of fact-based policies that serve the diverse people they are designed to help is more critical than ever."

Marina Udodik is the assistant board secretary/treasurer.

"To earn the trust of the community, we must lead by example," she said. "We will use processes and make decisions inspired by our hopes rather than our fears. To do that, we welcome individuals and organizations to the table who represent the left, right and center. We need individuals and organizations that represent special interests. We encourage participation from every corner of Edmonds."

Jay Grant is the secretary/treasurer.

For more information, or to join: http://www.edmondscivicroundtable.org.