Walkable Main Street: It will be Saturdays and Sundays 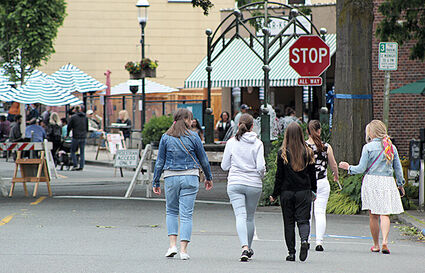 Editor's note: In a letter to business owners, Mayor Mike Nelson said he has decided to return Walkable Main Street to both Saturdays and Sundays this summer. Numerous business owners had lobbied Nelson to allow the event to be held only on Sundays.

Here is the letter from Nelson:

I wanted to take this opportunity to let you know, in advance of the official press release, that we will be instituting Walkable Main Street again this Summer in Downtown Edmonds on Saturdays and Sundays. This year Walkable Main Street will run for a shorter period than last year, starting on June 19th-20th and ending Labor Day weekend (Sept 4th-5th).

The street closure area will be the same as in 2020. It will run along Main Street from 6th Avenue to 3rd Avenue. Vehicle U-turns will continue to be allowed around the Fountain, with clear pedestrian pathways protected by metal crowd fencing.

We received a huge amount of public input from the public and dozens of business owners as a result of our surveys, the business roundtable, Councilmember input, emails, calls, and Facebook comments. Holding Walkable Main Street on Saturdays and Sundays was the front-runner in public opinion among the various options.

We intend to respond to this input by implementing:

We are also planning a substantial promotion of Main Street retailers via the City Facebook page and through signage and handouts. A cross-promotion campaign between retailers and restaurants will also be pursued to encourage visitors to both shop and dine while they enjoy Walkable Main Street.

I want to thank you for your valuable input, which genuinely helped craft the parameters of this year's Walkable Main Street, and I wish you all the best for the upcoming Summer season.