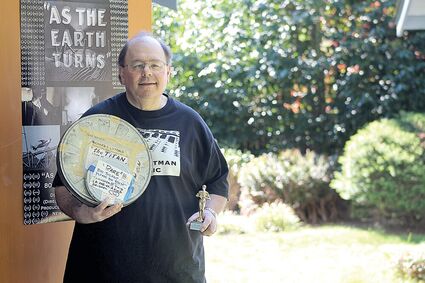 Ed Hartman's score for a long-lost silent movie has helped it win film festival awards. A screening on Turner Classic Movies is coming this year.

There are a few things to keep in mind as you watch "As the Earth Turns," a 45-minute sci-fi silent film directed by Richard H. Lyford.

Lyford was a teenager and amateur cinematographer, and his film was essentially a home movie for friends and family when he filmed it in 1937 and 1938. He edited it in the basement of his parents' house in Seattle's Mount Baker neighborhood, where the Franklin High School graduate constructed a makeshift home theater.

Then the film just disappeared.

And now, found after 80 years, it's back for everyone to see. It's still silent, and it makes use of title cards, but now offers a new score from Edmonds resident Ed Hartman, who created a lush backdrop to advance the film's narrative, which includes many well-placed musical cues.

When the Edmonds Arts Commission screens the movie at 1 p.m. Friday, May 7, on Zoom (use headphones or good speakers!), audiences groomed on CGI special effects may find the movie's effects dated.

They are – it was the late 1930s, and Lyford often relied on miniatures for the real thing. (He would go on to perfect his craft and pioneer high-speed animation and special effects for Disney, working on such classics as "Dumbo," Pinocchio" and "Fantasia.")

To enjoy "As the Earth Turns," audiences should simply revel in one of Lyford's early efforts, complete with its splices and jagged imperfections. Plus, there's Hartman's score.

And know this: There's a reason "As the Earth Turns" has won numerous film festival awards after finally being screened for paying audiences for the first time in 2019: The plot zips along – it's never "slow" – and flows seamlessly from one scene to the next.

The Arts Commission presentation will include never-before-seen bonus features, along with a Q&A with Hartman, who will share backstory secrets on the making of the film and how he came to be involved.

Hartman didn't just provide the soundtrack. He was involved in restoring the film, and released it under his 8th Sense Productions.

"The film itself has your crazy mad scientist who's really had enough of war on the planet," he said. "And what makes this kind of amazing is that this was made in 1937 and 1938, before World War II. It tends to foreshadow a lot of the events coming up in history."

Music in any film – but especially a silent film – can add tremendous value.

"If you ever watched a silent movie, without any music, it's kind of unwatchable," said Hartman. "The score creates the missing dialogue that drives the story forward. So from that standpoint, it was an extraordinary challenge for me."

Ed Hartman is an award-winning composer for films, TV, and radio. He's a freelance percussionist who owned a drum store in Seattle for many years and continues to offer lessons in Edmonds.

But those in-person lessons slowed down as the pandemic dragged on, so Hartman released a couple of new projects, available at http://www.edhartmanmusic.com: "Ed Hartman's Pandemic Holiday Album" and the pandemic-inspired single, "I Got Nowhere to Go, in a Hurry Blues."

In addition to releasing CDs, the Illinois native has, as a soloist, performed at Weill Recital Hall at Carnegie Hall in Manhattan. His own bands, the Olympic Marimba Band and Northwest Passage, play music from around the world. He also performs as a solo one-man-band at concerts, fairs, festivals, schools, colleges and events of all kinds.

But "As the Earth Turns" has been his passion the last few years.

"It's really a combination of classical and some jazz, all from the period. I've had some really nice comments about that. As much as it's a period piece, it does have some modern elements to the score. You go to old movies and the music's pretty tinny, recorded live with one microphone in the studio. This is modern cinematic sound. It's got a big sound to it, and that's what I love – big, epic movie scores."

Due to technological advances and the various ways to create music electronically, the ability to create big music on a smaller budget – without hired musicians – is much easier.

"You know," said Hartman, "John Williams is the master of operatic themes where you have a theme for many of the characters in the story. I've also developed themes in this film for the characters and the action. There's a lot of driving music because the action is pretty intense."

Drum lessons led Hartman to "As the Earth Turns."

One day, after her son had taken lessons from Hartman, Kim Lyford Bishop decided to take lessons herself. She just happened to be Richard Lyford's grandniece, and knew about her great uncle's past and his successes, which included directing an Oscar-winning documentary in 1950, "The Titan: Story of Michelangelo."

She eventually acquired the film rights to Lyford's early films from his son in an effort to preserve them. In 2017, when she discovered Hartman scored films, she asked him if he might be interested in providing music for "As the Earth Turns."

Intrigued, Hartman said he'd be glad to provide music for the silent movie.

Soon, he became involved in editing and going through Lyford's collection, scanning what they could. The pair also discovered more pieces of "As the Earth Turns," which they incorporated into their final version of the long-lost film.

"The quality of the scan was reasonable," Harman said. "If Lyford had produced this for a studio, they would have cleaned it up. We left it in its original condition because we realized if it were too clean viewers wouldn't understand the challenges he had. He went on to become an excellent editor. The Academy Award for the documentary in 1950 is largely due to the editing experience he learned when he was a kid."

After finishing the score and having it professionally mixed and mastered, Hartman and Lyford Bishop pitched it to the Seattle International Film Festival, which showed the film in 2019 at the Egyptian Theatre in Seattle.

That was the start of "As the Earth Turns' being shown in 122 film festivals and picking up 136 awards and nominations.

"As the Earth Turns" is set in the late 1930s and stars Lyford himself as PAX, a mad scientist who desperately wants peace. But creating mayhem turns out to be his way of letting the world know about his intentions. The lead actress, Barbara Berger, portrays a hard-working newspaper reporter. Berger had a long career on Broadway and television.

The 16mm film incorporates themes of future technology, climate change – yes, climate change, which can become catastrophic in the wrong hands – and an overwhelming desire for peace even amid scenes of destruction. That includes tsunamis and lightning-like strikes from airplanes.

One nice touch of Hartman's score comes when climate change causes snow to fall in July – the accompanying music conveys a John Williams-like sense of wonder.

"Well, it may be a little bit of a stretch to say it's necessarily a climate change film," Hartman said. "But PAX uses weather and understanding of climate, which is very similar to 'In Like Flint' from 1967, where scientists are controlling the weather."

In addition to winning its share of awards, the film stands as a piece of celluloid history from pre-World War II, and shows how an indie filmmaker was ahead of his time.

"And, if you compare Lyford's special effects to the 'Flash Gordon' serials between 1936 and 1940, the young director wasn't that far off," Hartman said.

"The other astounding part of the story is he didn't do this in Hollywood," he said. "He had no money. He did this with friends and family in Seattle and the surrounding area. And he had learned enough about filmmaking – he was even developing his own film."

Lyford was prolific, writing 58 screenplays by the time he created "As the Earth Turns," his ninth film. When not making films, Lyford created signage for businesses, took professional photos, and owned a small printing press.

Today, Lyford's films are being discovered by film historians. FilmFax magazine, a favorite of retro movie and TV show fans, ran a four-page article in 2019 that gave the film exposure beyond the film festival circuit.

"As the Earth Turns" is already streaming on several apps, including Amazon, YouTube, Google Play, and Tubi. (But none have Hartman's commentary, as you can hear with the local showing.)

Turner Classic Movies will air the film this year.

Hartman has also finished a documentary about Lyford, as he owns a stake in Lyford's films. A DVD is coming.

He also has copies of films Lyford created for other people, which is another reason to watch and listen to the May 7 Zoom screening.

"There's some remarkable stuff in there," Hartman said. "And I'm going to show some of it in the screening."

"As the Earth Turns"

When: 1 p.m. Friday, May 7
Where: Live on Zoom
Tickets: Free. Register at http://www.bit.ly/2R5Npja
Info: http://www.astheearthturns.com. 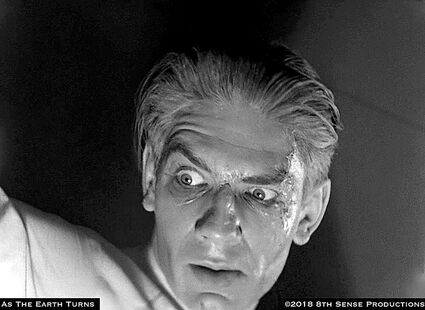 Director Richard H. Lyford played a mad scientist in "As the Earth Turns," which he directed. The movie was lost for 80 years.