Showing up to show their solidarity 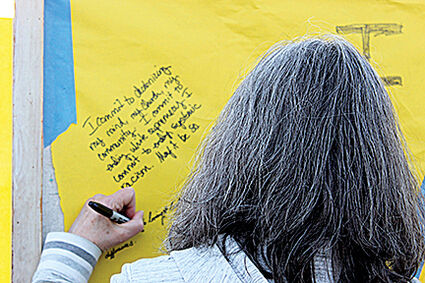 Participants left their thoughts about their commitment to social justice.

On April 21, the day after former Minneapolis police officer Derek Chauvin was found guilty of murdering George Floyd, dozens of people showed up at Edmonds United Methodist Church for a "Vigil of Lament and Solidarity."

Participants were encouraged to write their thoughts about "With longing I hope to forgive ... ." and "I commit to ... ."

"We have been, as a country and a community, attending to a lot of lament and grief, and having a deep desire to be in solidarity with Black and Brown communities and Indigenous communities," said Pastor Ann Jacob. 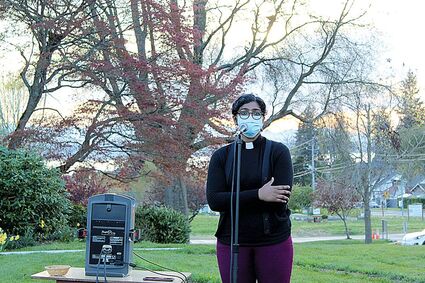 "One visible confirmation of that is this community showing up and saying we reject hate and we reject any form of violence, whether it's from a police officer or a neighbor. And what we want to collectively say is that we, in solidarity, are going to come together and bear witness to one another.

"And then have a shared commitment toward dismantling white supremacy and racism."

Jacob spoke of her reaction after hearing the jury's verdicts.

"I think it's one form of accountability. What that verdict said to a lot of Black and Brown communities is that we believe that every person in this country is fully human, and when that right is violated by forceful death and murder, we will respond with some measure of accountability.

"Yesterday was a sign of accountability, and the movement for justice is actually one way to actively dismantle the system so that form of violence doesn't happen again."