Former state senator lived in Edmonds for more than 50 years 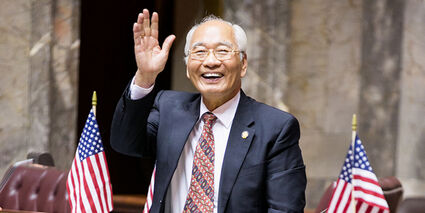 In an emotional speech to colleagues on the Senate floor April 15, Sen. Marko Liias spoke fondly of the late Sen. Paull Hobom Shin, who died April 12 in his home at age 85 (see obituary, page 10).

Shin and his family have been residents of Edmonds since 1968.

"He was a friend and a mentor," Liias said. "He was also an incredible trailblazer in his own life. I have the special privilege to have the opportunity to follow in Paull's footsteps. Paull taught me, and he used the phrase a lot with his constituents, that his service in the Legislature was payback time for all that his country had given to him."

Shin was the first Korean American elected to the state Legislature, where he served for 18 years.

When Shin resigned in January 2014, in part due to an Alzheimer's disease diagnosis, Liias – a former state representative – was appointed to his seat in the 21st Legislative District, which serves a portion of Edmonds.

"When I think about the opportunity to fill that final year of Paull's final term," said Liias, "to me that was payback time for my friends, for all that he's given to the community."

"Sen. Shin was one of those inspirational people whose incredible life story built a man of character and compassion. He cared deeply for the people of the 21st District and the state of Washington, and his tireless efforts on higher education will leave a lasting legacy."

"Sen. Paull Shin will be missed by many in the Korean American community," she said. "Even before his service in the Legislature, he was a long-time real estate agent, handling many transactions and attending community events, including my wedding 38 years ago. My condolences to Donna, his extended family, and his LDS church community."

Shin, born in Komchon, Korea, in 1935, was separated from his family at an early age, and was often forced to beg for food on the streets of Seoul. During the outbreak of the Korean war in 1950, however, he became a domestic worker for a group of U.S. Army officers.

In 1954, one of them, a dentist named Dr. Ray Paull, adopted him and brought him to his home in Utah.

"He embodied the American Dream in his own career," said Liias.

Shin served as an adviser and liaison to Washington Govs. Dixie Lee Ray, Dan Evans, John Spellman, and Booth Gardner on issues concerning economic trade and relations between the state, Korea, and Asia in general.

When Shin announced his retirement seven years ago, he said he did with "the deepest regret."

"I have loved this place and the work we do here on behalf of the people of Washington," he said. "I am grateful for the camaraderie, the work we accomplished, and the valuable lessons learned. I would also like to thank my wife and children for their love, support, and shared belief in the importance of service.

"Most of all, I would like to express my thanks to the citizens of the 21st Legislative District, who placed their trust in my stewardship for all of these years; it has been my honor and privilege to serve them."

Shin was a member of the Rotary and supporter of the Edmonds Community College Foundation, University of Washington Foundation, Edmonds and Mukilteo Boys & Girls clubs, Veterans of Foreign Wars, World Vision, and many other organizations.

He is survived by his wife, Donna, as well as two children. Services will be private.