Edmonds' Nancy Leson is a community hub in baking team

Edmonds Food Bank will get deliveries beginning May 3 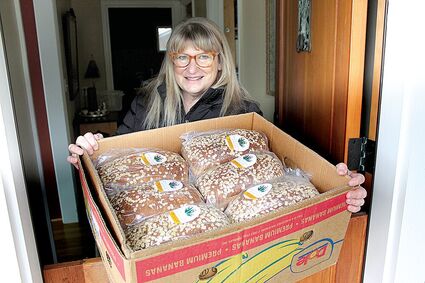 Leson would later pack the goods into her car and deliver them to Hopelink, a Kirkland-based social services agency with five food pantries in King and Snohomish counties, including one in Shoreline.

This particular day was Donation Sunday, one of two Sundays of the month of a coordinated effort of home-based volunteer bakers throughout Puget Sound. They're all part of Community Loaves, whose slogan is "We're Breader Together."

It's a grassroots bread-giving movement around Puget Sound and beyond, with 44 neighborhood hubs and hub coordinators, 900-plus volunteers and more than 20,000 loaves donated to an ever-growing number of food pantries, currently at 15.

"It's my favorite two Sundays of the month," said Katherine Kehrli, founder and self-described chief bread officer. "It is a great bread relay race."

(On Wednesday, Kehrli announced that the Edmonds Food Bank will begin receiving loaves May 3 as part of its senior delivery program.)

One of those delivering to Leson – a hub coordinator – was Karen Wheeler, a volunteer baker who, despite her limited mobility, dropped off several loaves.

"I was excited about having a chance to contribute," said Wheeler, who uses two canes to steady herself. "I was thinking of a way to do something voluntarily. This was just perfect, because most volunteering normally requires someone to walk."

She's been baking since October.

"It's worked out beautifully, because our kitchen is a pretty good size. By using a two-shelved, wooden-topped cart on wheels, I can gather things up and put them where I need to go. It took me a while to perfect the loaves, and now what used to be a struggle is easy."

Like all volunteers, Wheeler was given all the pertinent details for participation before baking.

Though bakers may choose from one of three variations of the Community Loaves recipe, Kehrli said the formula is very specific.

"It's what I created with a group of friends and avid, passionate, grain enthusiasts. Our formulas are over 50% whole grain. They've got whole wheat, whole grain flour, and have oatmeal porridge in them."

Kehrli purchases the ingredients wholesale from regional flour mills. Bakers then buy them in smaller batches.

"They make available flour and other ingredients at a discounted price," Wheeler said. "The rest we buy. I figure the cost per loaf is about $2. Which is wonderful. I'm only donating three loaves a time now, but I'm working on figuring out how to make it five. To hear people who get the loaves say that they find it doesn't drive their blood sugar up is wonderful. Chemically, breads that are done with sourdough are very different. They're much better for you."

Nancy Leson, as you may know, is one of our local celebrities. As her Edmonds home is a community hub, she receives an automatic notice when a new baker signs up to deliver in Edmonds.

"One woman said to me at a supply drop the other day, she said, 'Are you the Nancy Leson from the newspaper? I saw your name, and I thought it couldn't be,'" Leson said. In another case, a Community Loaves volunteer said yes, Nancy Leson is famous.

"I alway tell people that I'm a legend in my own mind," Leson said.

That newspaper referred to would be The Seattle Times, where Leson was a restaurant critic and food writer for nearly two decades. She left several years ago, and admits it was difficult to leave – good pay and benefits – but she came down with a common newspaper person affliction: burn out.

Plus, she had a kid at home, and her husband found himself working in the Gulf Coast for three years in the aftermath of the Horizon Deepwater oil-rig disaster.

"Nancy is an exemplary hub coordinator," said Kehrli. "And she does have a little bit of a star quality, right? At the same time, I want to acknowledge that the work that she's doing is also being done by so many."

"I've belonged to a lot of volunteer organizations over time," she said. "Community Loaves was something that interested me. I've baked since I was a teen, so when it came up, I was all over it.

"I didn't think the hub organization part would become as big as it is, but what it allows me to do is to meet all these neighbors. We share information about tips and techniques, and commiserate when our bake doesn't go the way we wanted it to."

Leson said Community Loaves started as an opportunity for her to do something she loves – hang out in her kitchen baking bread and share that bread with the community at a time when the need for food bank donations continues to skyrocket, especially during the coronavirus pandemic.

"Initially, I liked the idea of doing something more personal than just donating cash to a food bank," she said. "And because we were hunkered down at home unvaccinated, I wasn't going to go out and volunteer in person. What's more, with every potential social occasion curtailed and a cold, dark COVID fall and winter ahead of me, I knew I'd have extra time to bake. I had no idea how much a big part of my life Community Loaves would soon become."

Baking soon became so much more than an altruistic notion.

"I was helping myself, too, by getting to know other volunteers who are as nerdy about bread baking as I am; learning how to better handle and work with sourdough starter – something I'd been doing badly for decades; and sharing recipes, baking books, equipment and techniques with my new bread-baking buddies."

Leson discovered the project late last summer and signed on for an hour-long informational orientation session via Zoom.

"I baked my first honey oat loaves – a test batch of two – in September. They came out great, and I made my first donation a week later. You don't have to pass a taste test, or a texture test. But it's recommended that as a baker new to this group, you do a test-bake to figure out what you're doing right or wrong, and attempt to parse any problems before your first official bake."

Leson said Edmonds has a dedicated group of bakers. Her crew includes one of her book club friends (Jan Teal); the husbands of some of their book club pals (Stan Gent, Chris Fleck); a woman she knows from her son's Westgate Elementary School days (Wendy Harrison); and the husband of a woman she met long ago when she worked out at Harbor Square (John Goodman).

"I've had volunteers bake ahead of time if they know they'll be out of town, or otherwise unable to bake on a given week," she said. "They'll freeze their loaves and bring them to my house – I have extra freezer space – just so they don't miss a donation."

Not everyone drops off their bread in a car.

"Some walk from their homes," Leson said. "One fellow shows up on his bike. Another often arrives on a scooter. Some just drop and dash. Others knock – or I see them pull up, then go to the door to greet them as they sign them in, and we chat.

"Funnily enough, since the beginning, we've all been masked. I don't think I'd recognize many of my Edmonds hub members if we were to eventually run into each other at Brackett's Landing or QFC."

Created in a garage

Community Loaves began small in April 2020, with a handful of bakers donating 19 loaves. With each successive donation, numbers climbed. By the end of 2020, 8,344 loaves were donated by a dedicated community of 488 volunteers, organized into 32 geographically based hubs and supporting five food pantries in Washington and, later, Oregon.

As the organization – which has applied for nonprofit status – began during the pandemic, Kehrli said many members welcomed the chance to help those facing food insecurity.

But there was something else.

"There's a bit of self-preservation to it, as well. And what I mean by that is, people have turned to baking in the time of the pandemic, to nurture their loved ones, their neighbors, and to self-nurture. It's therapeutic to bake – it adds aromatherapy to your home. You've created this nurturing around baking, and giving it to our beleaguered food banks is just a win-win-win all the way around."

Kehrli said the bread's formula is designed to naturally give the bread a good six-day shelf life, and the addition of sourdough, a natural fermentation, helps. 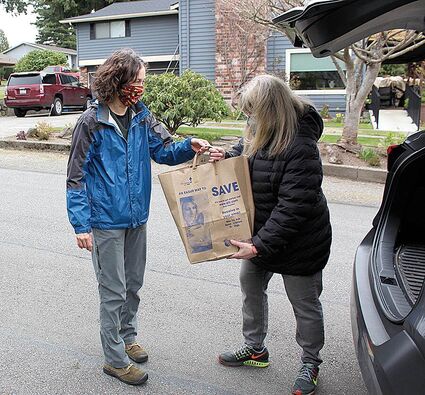 Wendy Harrison hands over a bag full of bread to Nancy Leson. Leson takes all of her donated bread to Hopelink in Shoreline, but soon may be adding Edmonds Food Bank to her route.

"We also have honey and olive oil in our bread, that gives it some shelf extensibility," she said. "It's not going to last forever. But the specific recipe formulas that we use are designed for that to be delicious for a longer period of time."

As the bread is healthier than many store-bought varieties, Kehrli said – like Karen Wheeler – has heard anecdotal evidence of those with diabetes who say the bread does not increase their sugar levels.

"We want to bring a really nutritious, comforting loaf of bread into the food bank system. We're not making a white sandwich bread," Kehrli said. "I love to bake bread, and people need food."

"It's making us feel part of the local community here in Edmonds, and the broader community in the greater Seattle area. To watch something start so small, and get so big so fast, it's terrific."

To learn more about Community Loaves, and how you can contribute: http://www.communityloaves.org.