Walkable Edmonds on for this summer 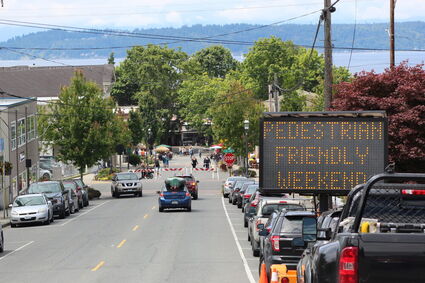 Walkable Edmonds will return this summer.

The City of Edmonds announced today, April 2, that it intends to relaunch Walkable Main Street this summer.

But in advance of any firm decisions regarding timing, the extent of closures, enhancements, and amenities, the city said it has reached out to the community, the merchants, and this coming Tuesday to City Council.

A survey was released to the public that ran March 11-24. 1,332 people took the survey. 629 individual comments were offered in the open-comment field.

Of the 629 comments, 88% expressed support for Walkable Main Street.

About 80 respondents (12%) expressed their oppositi...

As long as 5th South is open...everyday. And our ability to get to 5th round the fountain and then go South and up the hill to Edmonds way, 100th etc. Many shop there for many things. Plus, we need an escape route. Banking is essential...cut off Chase if you close 5th South to handicapped...they can't get to drive thru. This is unacceptable. We've already lost BOA for some very unusual reason...seems awfully curious we lose a Huge Bank at the same time plans have been in works to make main an open pavilion instead of a street. Apparently, They have been planning this dream long before ASKING citizens. AGAIN... I will ask BOA about this in Seattle. So Keep your main open from 5th West all the way down to the water.. But no to 9th down...NO NO NO. Again Edmonds people you think are going to come from all over to experience Edmonds will be appalled to find they have to go who knows where to even get there. Then when they finally figure it out they will find no parking. Won't fly.