Vaccine watch: April 15, everyone over 16 is eligible 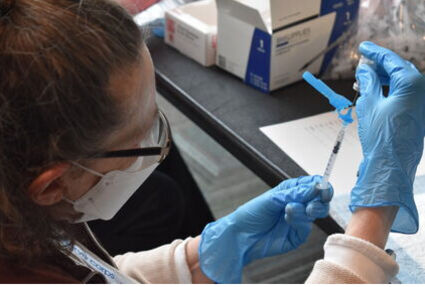 The Snohomish County Health District is currently vaccinating phases 1a, 1b1 and 1b2, and starting April 15, all Washingtonians over the age of 16 will be eligible to receive a COVID-19 vaccination.

Gov. Jay Inslee announced the uptick in eligibility in a news release and said the expansion is, in part, in response to a recent uptick in COVID cases in the state.

Eligibilities expanded on March 31, under 1b3 and 1b4. Anyone already cleared to schedule remains eligible. Verification from Phase Finder is no longer requested from patients, but identification may be requested. The identification is intended to verify the person arriving for the appointment is the one who scheduled. Phase Finder, the online tool to prove eligibility, is closed down.

Earlier in the week, Dr. Chris Spitters, health officer for the Snohomish Health District, said earlier in the week that vaccine supplies are limited. He said he was not in a hurry to expand eligibility after the POTUS announced an April goal, but "if it makes sense to go there, then I'm on board with that."

On March 31, new eligibilities opened and while identification will be required at mass vaccination sites, proof of eligibility will not be required. The online tool to prove eligibility, Phase Finder, is shutting down, according to the DOH.

Spitters agreed that some ineligible people will likely get through, but policing that does not make sense in this stage. Patients will complete a "self-attestation" stating their eligibility, before getting the shot, he said.

• People 16 and older with two or more comorbidities or underlying conditions;

• High-risk critical workers in congregate settings including food service, construction and manufacturing, and other settings where remote presence and social distancing are not possible;

• All people previously cleared for vaccines can still schedule.

• People 16 and older with disabilities or pregnancy;

People working in congregate jobs with a high level of face-to-face interaction, inability to physically distance, and extended time at work:

• Food processing such as those working on fishing;

• Grocery workers and those working in food banks;

• Public transit, in enclosed settings including bus stations, trains, ferries, airports and other high-density transportation settings. Also included are those in enclosed spaces such as taxis, limos, and people working in private vehicles hired to carry more than four people.

• Early learning and child care program workers operating under DOH guidance for child care, youth development, and day camps that were not covered in Phase 1b1. Those include tutors, babysitters and nannies.

The newly opening phase on March 31 moved up, from a planned unveiling in April, due to supply. It includes people 50 or older, with two or more comorbidities: two or more medical conditions that have come to be branded "underlying illnesses" in COVID-19. Data has shown that underlying illness increases risk for severe illness from COVID-19, which threatens both individuals and hospital resources.

In Snohomish County, step one is to check eligibility, and step two is to schedule. Those eligible can use PrepMod, a scheduling website link through the Department of Health. Or they can schedule with their own personal health care provider, a pharmacy, or a nearby Costco.

Eligibility proof is technically required, with some flexibility for the people giving the shots. That flexibility was spelled out by Dr. Chris Spitters, health officer for the county health district.

"We do employ common sense if someone comes through the vaccine site and they're obviously over 65 years of age, and they don't have their Phase Finder. We're not going to slow them down. If a 25-year-old comes through without their Phase Finder, we will be routing them back to recheck their eligibility," Spitters said in the March 16 Joint Information Commission briefing.

The Snohomish County Health District announced that eligibility phase 1b2 is open on March 17. Spitters said military veterans may schedule an appointment or by contacting their Veteran's Administration primary care team directly. (See "Veterans can get vaccines at VA" below, for details.)

For the non-veterans, appointments are limited to those in 1b2 and everyone already eligible for a vaccine in prior phases. The bulk of the newly eligible group is critical workers who have face-to-face public contact. It also includes pregnant or disabled people who are 16 or older.

The jobs covered in the March 17-opened phase are those where physical distancing of 6 feet is not possible and the time spent in the work setting is three hours or more, in one full 24-hour day. Disabilities for the March-17-eligible group include developmental problems such as Down's syndrome and intellectual disabilities, as well as impairments to hearing and blindness. Mildly impaired sight is not the focus: the eligibility in this phase covers those with more pronounced impairments, Spitters said.

Veterans can get vaccines at VA

Veteran's Affairs will vaccinate service people already in their care and those over 75 with health conditions, according to the U.S. Department of Veteran's Affairs. Some VA facilities offer to those 65 and older. Specific direction will require contact to the VA for those who may be eligible as veterans. More information is here: https://bit.ly/3vnRAGM.