By Will Paulson
For the Beacon

For Mika: Community works for inclusive playground at Civic Park 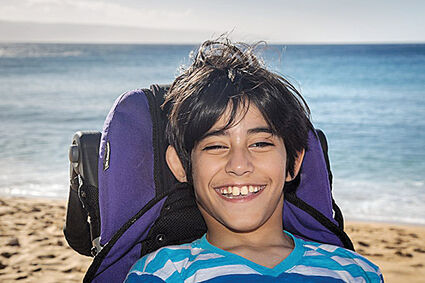 Washington state legislators have put in a $257,500 funding request for Mika's Playground, http://www.mikasplayground.org, an inclusive playground designed for children of all abilities, at the future redesigned Civic Park in Edmonds.

The playground would be built in memory of Mika Zimbalist, a boy born with cerebral palsy.

"We knew at an early age that he would have physical complications and physical limitations," said Mumtaz Zimbalist, Mika's mother.

The playground is a joint effort between Mika's family and the Edmonds Rotary, which is running a letter-writing campaign to raise awareness and support for the project: http://www.bit.ly/3bWd59V.

Before moving to Washington, the family lived in California, where sunny skies and a variety of adaptive parks made it easier to spend time outdoors. "Mika's absolute favorite thing to do was to meet kids at the playground," said Zimbalist.

Once in the Pacific Northwest, however, they found few parks that could accommodate Mika and his wheelchair.

(Seaview Park became the site of Edmonds' first inclusive playground, thanks to the efforts of then-Councilmember Mike Nelson, in 2019. http://www.bit.ly/2Pfv81.

They continued to gather outside, but the design of many parks meant Mika needed extra help to climb on playground equipment. But as he got older, like a lot of kids, he wanted to do more things on his own.

"Some of the playgrounds would have wood chips, and they would get stuck in the wheels of this wheelchair, so we would have limited mobility at the park," said Zimbalist. "You don't want your parents picking you up and putting you into equipment. It had always been on my mind: Wouldn't it be great if we could have playgrounds that would work for kids in wheelchairs?"

Mika won't be able to see an inclusive playground in Edmonds. He died in February 2019, just before his 11th birthday.

His mother decided she wanted to memorialize her son as a way to navigate her and her family's grief. She reached out to Edmonds' Parks and Recreation Department, which she said was in full support of her idea.

The department connected her with the Edmonds Rotary Club and David Kaufer, who is also a parent to a special-needs child.

"It's a great cause," said Kaufer. "I brought it to our board and said, 'Hey, this is something I think we could get behind.' I have a son on the autism spectrum. Parents who have children with different types of disabilities understand that it's a real challenge taking them to traditional playgrounds."

Allison Pence, who had spent time writing grants during her career, answered a Facebook post asking for volunteers. She began writing grants and reaching out to state legislators and gained support from Rep. Strom Peterson (D-Edmonds).

Then the pandemic brought everything to a halt.

"Everyone's energy was focused on COVID," said Pence. "I couldn't blame him or anybody else for things stopping. I was just so concerned about not only myself but my family and my children."

But a year later, as the state worked to get the virus under control and the Legislative session opened in Olympia, Pence is giving it another shot.

"I'm really hopeful that this time around we'll get some funding out of it. This is something that I'm very passionate about, and I'm doing everything I can to make sure that this works."

The letter-writing campaign hopes to help secure funding from Olympia.

"(The letters) certainly have an impact," said Peterson. "Especially letters coming from your own community, from your own constituents. With all that's going on in Olympia when we're discussing a thousand different topics, it's really helpful to see those and to help remind you of an issue in your district that matters to the people that put you in the office who you represent."

"I was so excited when I heard that we're going to make it an inclusive playground," said Ortiz-Self.

"I want to make sure that our state dollars always include everybody as much as possible. I put the budget request into our capital budget chair for the $257,500 that was requested. I am lobbying for it. I'm meeting with the chair. I'm trying to do everything we can to make sure that this project gets funded."

While it will still be weeks before they find out if the park receives funding, the Rotary Club is still asking the community to continue sending letters and donating directly to the cause on the Mika's Playground website.

In spite of the setback of COVID-19, the team behind the project continues to forge ahead in the memory and spirit of Mika.

"Anybody who knew Mika would kind of talk about his smile and his joy," said Zimbalist.

"Despite the fact that he had a lot of physical issues, he would persevere and always be smiling through it. I'm hopeful that this will bring a smile to other kids who have complicated bodies or are differently-abled than their families."

Letters of support can be written to:

Will Paulson is a student in the University of Washington News Lab.

I ran out of words. It is almost guaranteed that those who live in the Bowl area have more money...right. Also it's logical to assume their parents have Van's, for their handicapped kids, And last time I checked the state doesn't include a new van with ramps, lifts etc. for anyone, especially children for anything. So, again the Wealthy get the PARK...and the other citizens of Edmonds who are the majority get nothing as it isn't accessible for them. So, tell me how that is fair in any way what so ever. You can't because it isn't. I have repeatedly said, watch this entitled behavior because it is already biting you in the***. And that is not going to get better. Don't find out the hard way. Just learn about how to be diverse, and then walk that talk....and we will all unite here. I am fighting for this. I don't even have children so my only dog in this fight is the constant beautification of The Bowl...and leaving the rest of the city nothing. If you would just share! Please...teach.

This is a very compelling post. I believe most decent people care very deeply about any child or adult with mental issues (sometimes Autism, it was mentioned.) And yes physical disabilities also children and adults. The fight and there will be is not the park idea itself elf. The problem is where EDMONDS wants to put the park. We have in the Bowl a park right on the Beach. We have the N end beaches to go to play and make sandcastles. I like the idea of putting this awesome Park, with rubber pellets (good idea) But It should be put in 5 corners area. Why? So every child with or without disabilities has a place to play. Children EAST of (up the hill) 9th on up...need a GOOD park too. They have no Beach, they have nothing. They also many have disabilities, no transportation to The Bowl, children can't ride their bicycles up or down this almost 1 mile very steep Main Street. Most people up here also can't walk that hill...up or down. So I say this park should be in a more accessible area