Rick Steves: 'It's so exciting how things are snowballing.' 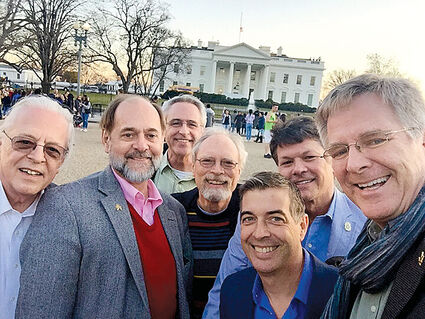 Rick Steves, right, campaigns for marijuana reform laws in Washington, D.C., in 2016 with NORML board members.

Editor's note: This is the second in a two-part series on Edmonds resident Rick Steves and his efforts to legalize marijuana for adult recreational use nationwide. To read part one, go to bit.ly/3tfhiLE.

Since Washington and Colorado legalized the adult recreational use of marijuana nine years ago, Edmonds residents no longer have to hop in their cars and drive more than a few miles in all directions to score cannabis in all its various forms.

So where does Rick Steves, Edmonds resident and new chair of the board of director...