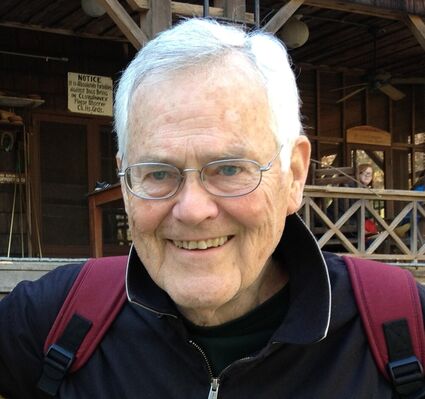 George H. Murray, Jr. – beloved husband, father, grandfather, brother, son, community volunteer, and friend – passed away on Jan. 28, 2021, at his home in Edmonds after a long struggle with idiopathic pulmonary fibrosis. He was 85.

George was born in Tulsa, Oklahoma, on Feb. 7, 1935, to George H. Murray Sr. and Maude Saffle Murray. He attended Marquette Catholic School, and earned his pilot's license at age 14, sparking a lifelong interest in flying.

He graduated from Tulsa University in 1956, where he was president of his senior class. After graduating, he briefly worked for Lockheed Missiles systems division in California before being called to active duty by the Air Force.

After completing his enlistment, George earned a second bachelor's degree in M.I.T.'s program for Astronautical Engineering, and then an MBA in 1965 from Harvard Business School.

He worked for American Airlines in Tulsa and New York City before taking a position with VYDEC, which was beginning to market a new type of word processor to revolutionize the office.

In 1980, George married Linda Ward O'Reilly and they moved to Geneva, Switzerland, where George worked for Exxon Office Systems and then NCR.

After George retired from NCR in 1993, the couple trekked west to beautiful Edmonds, where they became involved in many hobbies and community activities.

George played several musical instruments, flew with the Civil Air Patrol, and was active with the Kiwanis Club of Edmonds. At Kiwanis, he became a champion of the Scriber Lake High School writing program led by Scriber Lake teacher Marjie Bowker.

In his last years, despite growing health challenges, George continued to be engaged with life. Family was at the core of his connections: He showed up for his grandsons' games and talent shows, spoke to his siblings every week, and credited a family reunion in 2017 with rejuvenating his health.

He was always ready with a story, a joke, a song to play, a book to share and – always – his full attention.

George was beloved for his sense of humor, intelligence, compassion, and ability to bring deep presence, listening and fun to any conversation. To his loved ones, he represented families, happiness, love, respect, and caring, among many other things. He will be missed beyond measure.

A memorial service has not yet been scheduled for George. You can share tributes at his page on the Beck's Funeral Home site at http://www.becksfuneralhome.com.

In lieu of flowers, please consider a donation to a cause that was important to him: The Edmonds Food Bank (donate at edmondsfoodbank.org/donate); the Kiwanis Club of Edmonds Charitable Foundation (send a check to P.O. Box 221, Edmonds, WA 98020); or the Scriber Lake writing program (make out checks to "Edmonds School District" with "Scriber Writing Program" in the "to" line. Address to the attention of Marjie Bowker c/o Scriber Lake High School, 23200 100th Ave W, Edmonds, WA 98020).