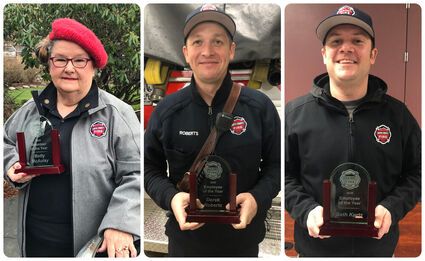 Three firefighters who took part in a rescue off the Port of Edmonds were among those honored by South County Fire, whose service area includes Edmonds.

A special unit citation was awarded to Capt. Sean Torey, firefighter/paramedic Monte Pfeil, and firefighter Kyle Almeida for their role in a rescue of four adults who ended up in the water when their boat started to sink in windy, choppy conditions off the Port of Edmonds.

Here are the other awards from a virtual award presentation that took the place of the regional fire authority's annual recognition banquet, canceled due to the pandemic.

2020 Pandemic Response Recognition: South County Fire has been on the frontline of the pandemic from the start, transporting the first patient in the country last January. Plaques will be placed at Headquarters and all fire stations to recognize the tireless response efforts, collaboration and dedication of employees within all levels of the regional fire authority to prepare and to protect each other and the public.

– Captain Todd Wigal was instrumental in developing and implementing a program to streamline information sharing and decision making, up and down the chain of command, using subject matter experts throughout the organization. The new structure has already proven its value in many ways, the largest being deployment of new, more effective hose and nozzles on all fire apparatus.

– Public Information Officer Leslie Hynes has delivered life safety education and information about emergency incidents for over 23 years. She has been a backbone to community events and other community engagement projects, newsletters, website development, ballot measures, as well as being a founding member of the Fire One Foundation, now the South County Firefighter Foundation.

– Assistant Fire Marshal Aaron Huckstep was recognized for his leadership, professionalism and innovation in support of the Fire Prevention Division.

– Firefighter/Paramedic Ted Martin and Firefighter Jake Hepper were recognized for the empathy and support they provided to a young family following a traumatic incident.

– Civilian Employee of the Year:@ Seth Kurtz. Kurtz, a facilities staff member, was honored for carrying out his endless duties with kindness and a friendly attitude.

@– Firefighter of the Year:@ Captain Derek Roberts. Over the last two years, Roberts made a significant impact in his Training Division assignment to support veteran firefighters as well as recruits in the Fire Training Academy. He has become a trusted mentor, teacher, motivator and big brother to many firefighters hired since 2019.