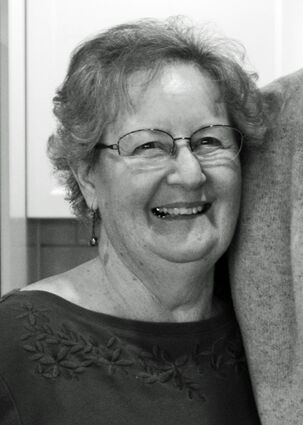 Per her wishes, she was able to remain in her home with hospice support before the final week of her life, when she was moved to Evergreen Hospice Center near Kirkland, where the care she received made her more comfortable for her final days.

Janet Smith was born on Dec. 15, 1934, in Spokane to father Hugh Lyle Smith and mother Mary Ertis Welch Smith. She graduated from Central Valley High School in 1952. While growing up, she helped nurse her mother, who died of cancer. She also lost a brother as an infant.

While attending the University of Washington, she met her future husband and love of her life, Floyd Barker, on a blind date. She loved to tell the story of meeting Floyd's family for the first time at Thanksgiving, when she joined the women of the family in washing dishes and taking a walk, while the men sprawled themselves across the furniture in post-meal relaxation.

Janet and Floyd married in 1956 and moved to Edmonds, where they have made their home ever since. They raised two daughters, Lynda (Scott) Gwin of Clyde Park, Montana, and Karen (Terry) Waddell of Poulsbo.

Shortly after moving to Edmonds, Janet and Floyd began attending Edmonds United Methodist Church. A clear picture of her kind and generous heart, Janet was very involved in a variety of church activities supporting the children's interests, working in the office and serving as church historian.

As her family was growing, in addition to encouraging her daughters' activities, Janet worked as a teacher's assistant for developmentally disabled children and adults.

Later, when the girls were grown, she earned a degree in accounting from the Central on the Sound program of Central Washington University at Edmonds Community College.

She worked for a major accounting firm for a period and later was self-employed as an accountant before retiring in 2001. A master organizer, she enjoyed taking a client's jumbled records and making sense of them.

Janet was an avid gardener, an interest she cultivated in her father's garden in the Spokane Valley, where she fondly recalled onions that were sweet enough to be eaten like apples.

She would often use the literal fruits of her gardening labors to good use with canning applesauce, baking pies from home-grown berries, etc. Janet was also an excellent seamstress, among other craft hobbies.

Family was always Janet's top priority. She and Floyd spent many hours and traveled many miles conducting genealogical research, meeting many relatives along the way. She was an excellent cook who loved family gatherings, and the "goody bags" she sent home with family members were legendary.

In addition to Floyd and her daughters, Janet is survived by a sister, Connie Smith of Seattle, as well as five grandchildren, seven great-grandchildren, and numerous nieces and nephews. Janet's legacy will live on forever through her family. She taught them the art of hard work, organization, generosity, steadfastness, faith, loyalty, care, devotion, and the importance of an abundance of love for others. To say that she will be missed is a deep understatement.

Due to the ongoing COVID pandemic, a celebration of her life will be held in the future, at the IOOF Cemetery in Monroe. In lieu of flowers, the family suggests remembrances in her honor to Edmonds United Methodist Church, 818 Caspers St., Edmonds, WA 98020.