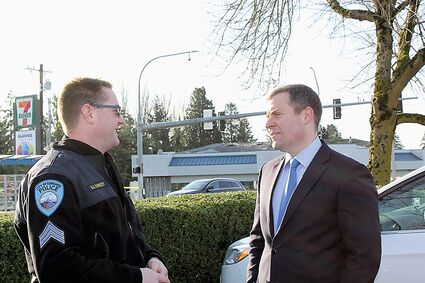 A new report issued by the City of Edmonds details numerous deficiencies and oversights in the Edmonds Police Department regarding public safety and policing.

The conclusions come seven months after Mayor Mike Nelson announced the formation of The Mayor's Equity and Social Justice Task Force to create reforms to address what he said was police violence and systemic racism.

Nelson said he withdrew Pruitt's name because the chief, in job interviews and documents, failed to mention he'd been rejected for a job with the Lake Stevens Police Department.

But Nelson has not commented on why he and four councilmembers approved Pruitt's confirmation despite knowing in advance of domestic violence concerns and his termination from a Seattle Police Department training program.

The report includes several findings and recommendations. The full report can be found in its entirety online at http://report.edmondswa.gov.

– The Police Department, while intentionally working to hire a more diverse force, does not currently have, yet should have consistent, ongoing training in working with marginalized populations, specifically communities of color.

– There is a lack of insight into the perspectives and concerns of many in the community that they serve, especially communities of color.

– There is a lack of training in community outreach and community engagement that would help the Police Department in serving the citizens of Edmonds.

– A lack of training in police, dealing with the social services needs of citizens, was evident. Police are being asked to provide social services without adequate training, which makes it challenging for a social worker to follow up after the fact.

– Many residents of color do not feel safe in Edmonds.

– Accountability and transparency are two terms that came up repeatedly throughout the Task Force process, and there are differences in how the police and the community understand those terms as they relate to public safety.

– Establishing an implicit bias training program for the Police Department.

– Continued use of the Task Force in developing an ongoing equity work plan.

The Equity and Social Justice Task Force was formed "for the purpose of providing advice to the mayor on issues of equity and justice," according to the report.

The task force began meeting in August 2020 to study equity-related issues within city government and create an equity toolkit, as well as an equity work plan for the city. The first priority was Police Department practices as they relate to public safety and policing.

The task force consists of 13 members, including a combination of civic and business community members, as well as representatives from regional equity and inclusion organizations.

The Beacon has requested the names of all task force members.

Over the last six months, the task force has worked independently under the guidance of Armstead Consulting, a consultant who specializes in equity and justice work. While the consultant assisted the task force in providing information on best practices for this process, the work of the task force was entirely driven and completed by members.

"This report found problems in how we police and gives solutions to do a better job of supporting Black residents and other marginalized populations," Nelson said.

"I am sharing this report with our police performance audit firm and our police chief selection organization to help inform expectations for our next chief, moving forward. I want to thank the citizen task force members who dedicated themselves to help address equity and social justice issues facing our community.

"As I am committed to be as transparent as possible with actions to be taken in regards to our Police Department, I am releasing the Equity and Justice Task Force report in its entirety."

Acting Chief Lawless told the Beacon he had no comment.

The task force created an Equity Toolkit that provides a set of questions to help decision-makers focus on equity in both their processes and outcomes. The questions are designed to create a more inclusive perspective, drawing attention to how a decision may create the potential to affect marginalized groups.

Those steps, according to Lawless, included:

– The Edmonds Police Department was one of the first in the region to implement a broad less-lethal force program. During every use-of-force training, officers review de-escalation techniques.

– Every use-of-force incident is reviewed at three different levels, with Lawless doing the final review. All use-of-force reports are reviewed collectively to identify any trends and/or recommendations for training or policy updates.

– All officers are currently required to attend anti-bias/anti-harassment training, to include "acknowledging and managing the hidden bias of good people."

– All officers receive Crisis Intervention Team (CIT) training; this training was mandated internally by the department several years before the state Legislature required it.