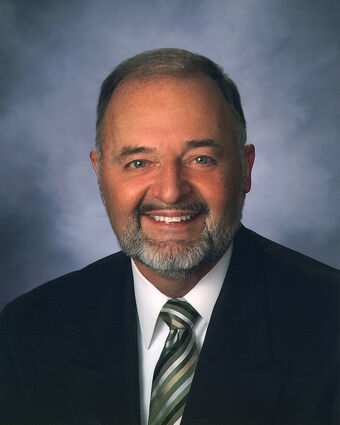 Dick Van Hollebeke passed away quietly at home, surrounded by his wife, Monda, and his children, on Jan. 2, 2021. Born in Moline, Illinois, on Aug. 15, 1939, Dick moved to Seattle at the age of 3 with his parents, Suzanne and Maurice, and four brothers, Ralph, Robert, Ramon, and Ronald.

He attended O'Dea High School, class of 1957 and, after joining the Coast Guard (Reserves) in 1959, attended Gonzaga University.

Soon after marrying Monda (nee Sherick) in 1963, he and his brother Ray opened Van's Nursery at 145th and Aurora, and then Dick ran a landscaping company until he began a second career in 1974 as an insurance professional and stockbroker, with an office in Seattle and, a few years later, in Edmonds.

He received the highest professional designation from The American College in Bryn Mawr, Pennsylvania, in 1986.

Dick's life centered on family and community. He considered the Edmonds community his family. In emulating a life of service to his six children (Maureen, Jean, Joseph, David, Mark, and Kathryn), he inspired them to be of service in their own communities.

Dick "moved in circles, and those circles moved" (Poet Theodore Roethke). For the past 43 years he has volunteered in and led many civic projects. As a business owner at the corner of Fifth and Walnut, Van Hollebeke Insurance and Financial Services (now owned and operated on the Edmonds waterfront by his son David Van Rask), he was an active member of the Chamber of Commerce's Economic Development Committee.

He served the city of Edmonds as a councilmember from 1995-1999, served for 10 years on the Edmonds College Foundation, and 10 more years as a member of the college's board of trustees.

What people will remember most about him is his friendly personality, his humor, his readiness to reach out to anyone in need of help, his warmth, his smile, and his character.

Dick was preceded in death by his parents, and his brothers and their wives – Jane (Ralph), Irene (Robert), and Donna (Ray) – except for Jo Anne, who survives her husband, Ron. Jo Anne and Monda now head the Van Clan.

The family wishes to thank friends, neighbors, parishioners, and other members of the community for their outpouring of support and their tributes acknowledging Dick's impact during his lifetime.

Vigil (via Zoom): A virtual vigil service with opportunities to share stories and remembrances about Dick is 7-8:30 p.m. Thursday, Jan. 14. Zoom link available upon request from [email protected]

Virtual Requiem Mass at St. Joseph's Catholic Church 11 a.m. Friday, Jan. 15: Due to COVID restrictions, in-person attendance is limited to immediate family only, but virtual attendance is possible. Attend via this link: https://www.youtube.com/c/StJosephParishSeattle/.