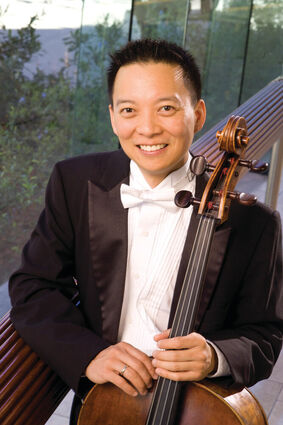 The symphony recently announced that all in-person concerts for the season have been canceled due to restrictions put into place locally and statewide due to the coronavirus pandemic. CSO music presentations last October and December were presented online for the same reason, with scheduled concerts for this March and May also being switched to virtual formats.

The symphony's music director, Michael Miropolsky, curates the performances, which he describes as "evenings of music and celebration."

"We'll enjoy treasured past performances and personal stories from members of our orchestra," Miropolsky said. "The program includes the orchestra's earlier recordings, contemporary recordings of our musicians, and more."

The January presentation will feature a popular and familiar soloist in cellist Amos Yang. He is assistant principal cellist for the San Francisco Symphony and previously a member of the Seattle Symphony.

Yang has performed as a soloist and chamber musician throughout the United States, the Far East and Europe, including in concert at the Aspen Music Festival, the American Academy in Rome, Wigmore Hall in London, and Alice Tully Hall in New York City's Lincoln Center.

He has won numerous awards, including first prizes in the American String Teachers Association and Grace Vamos competitions.

"Two of our musicians have prepared a couple of pieces," Miropolsky said. "Trombonist Barry Ehrlich will perform George Telemann's Sonata in F minor, and David Tan, whom (CSO patrons) know as our principal cellist, also is a wonderful pianist. He will perform Brahms's Intermezzo in A major, Op. 118."

In addition, two Cascade Symphony violinists – Holly Sullivan and Donna Petruzzi-Benson – will share stories from their years as members of the orchestra.

The public can join this event by visiting either of two online sites. One is via the CSO's website at http://www.cascadesymphony.org/virtual. The other link is on the orchestra's YouTube channel at http://www.bit.ly/3rTSmcJ. After the virtual concert is streamed, it will remain available for on-demand public viewing via these same links.