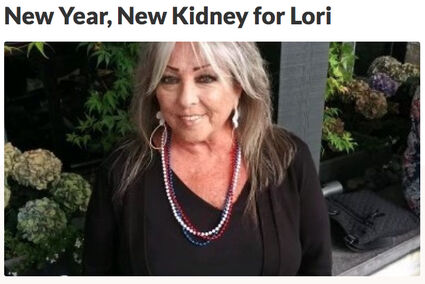 A GoFundMe account has been created for a longtime Edmonds hairstylist, Lori Peña, who is undergoing a kidney transplant Wednesday, Jan. 6.

"My pal Lori Peña (the woman I'm talking about when I say, 'Only my hairdresser knows, for sure!') is one of the most generous people I know," said Edmonds resident Nancy Leson, on her Facebook page. "In a few days, one of her friends is gifting her with a new kidney. Lori got her last one 30 years ago.

"She has worked so hard and has been so sick, but she'll still text me and say, 'Bangs?' - then fit me in for a quick snip. She could use some financial help."

From the campaign page:

Thirty years ago, shortly after opening Salon Peña in downtown Edmonds, a young hairstylist with a heart of gold – and a failing kidney – had a transplant that saved her life and allowed her to become a vibrant part of the downtown Edmonds community.

On January 6, 2021, Lori Peña will undergo another transplant: a gift from a longtime friend and client, Wendy Hutchins-Cook.

While an organ is a kind of sacrifice too few of us would brave, those who love and support Lori hope you'll make an easier donation: a financial one.

Over the past few years, with her kidney in failure, the hope of a transplant in her future, and mounting medical bills, Lori's had a tough go. But as ever, she kept going. She sold her house, closed her beloved business, and leased a solo suite at Mosiac studios where – between the many hours spent in a dialysis chair – she's worked as much as possible, but not nearly enough to make ends meet.

Fabulous, flamboyant, and known for her generosity, Lori needs and deserves our help to recuperate and rejuvenate from two-plus-years of dialysis. To take time off for the first time since she underwent her original transplant. To get back on her feet and ultimately, back behind the chair she loves most: the one with a client in it.