The 407 Coffee House closing on Main Street in Edmonds 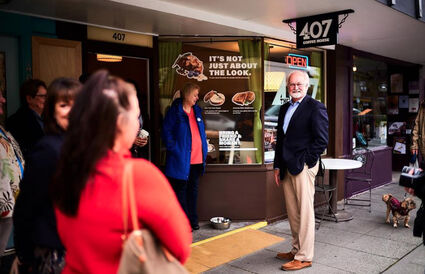 Then-Mayor Dave Earling at the opening of The 407 Coffee House in Edmonds.

The 407 Coffee House is closing on Main Street. It had replaced the Ganache pastry shop in April 2019, which had replaced Garden Gate. Below is the shop's post on the closing, which it blames on "a government that is hellbent on your destruction."

It's been fun! We had a hard fight just to open nearly two years ago, spent three times our initial budget to comply with all the bureaucracy, fought hard to sustain a business for two years at a loss and we played the game as best we could. But alas, hard work, huge risk, and large financial losses are not enough to overcome a government that is hellbent on your destruction.

One lockdown was survivable, barely – but the ongoing destruction of basic human freedom is never survivable for anyone, least of all for businesses with razor-thin margins that have no room for error just to stay open.

It's official - we regret to inform the Edmonds community that we're permanently closing our doors and there are no plans for us to return.

We've let 100% of our staff go, and we've tried to survive as best we could, however business is very simple - if your government mandates destroy your ability to make consistent sales, your future as a business is determined for you by others regardless of how hard you work, or how well you comply.

One business closing down means nothing to anyone except the people that lost enormous investments that don't just magically rematierialize - that money is gone! But when notifying our suppliers, they responded and said that they lost over 100 customers in just a few months - what do you think will happen to them, and then their suppliers, and on and on down the economic chain? The economic chain is called a chain because one's sales are another's income. And it won't take long before the consumer bares the cost for that.

Businesses closing means you pay more, get less and have no choice about it as a consumer. These effects won't just hit the business owners, but they'll leak into your living room as a consumer soon enough.

And so, dear Edmonds, it's goodbye from us at the 407. Thank you to the amazing people in this community, the leadership that really tried to make it work out for us - thank you! You're good people, and I hope that the damage is as isolated for you all as possible. And in closing, do remember that human freedom is the engine of prosperity for everyone, and keeping that candle lit requires effort from everyone.