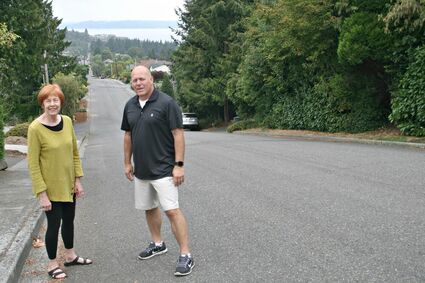 Linda Niemi and Jim Carroll, a neighbor, at the top of Pine Street in August 2018. They said they were appreciative but not satisfied with the City of Edmonds' plans to increase safety on their street.

We're sorry to report the passing of Linda Niemi, an advocate for safety measures on Pine Street in Edmonds, who died Monday, Dec. 22.

Niemi was known to her family and friends as "Koko." She died after being diagnosed with brain cancer over the summer.

The Beacon reported on issues surrounding Pine Street in August 2018.

Niemi and other neighbors had written emails, made calls, and attended council meetings expressing their concern about speeding on the street, frequently by tho...