Give the gift of community this year | Publisher's Desk 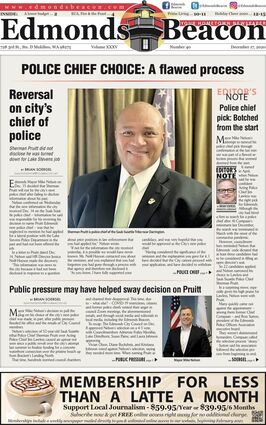 Santa, like life, sometimes surprises you, and you get things that weren't on your wish list. Worse yet comes the day when you discover that neither Santa nor the life you envisioned was real.

The holiday season always reminds me of the time my 6-year-old daughter came home from first grade ecstatic about a Christmas present she was expecting. Some teachers had decided it would be fun if the fifth- and first-graders exchanged Santa letters.

The plan was for the first graders to write Santa about what they wanted for Christmas, then each fifth grader would be assigned to respond as Santa to one of those letters. My daughter asked for a bunny. Not a stuffed animal, you see, but a real, live, breathing rabbit. Her "Santa" wrote back and told her, basically, "You've got it." She was beside herself.

Me too. It certainly wasn't on my list for her. I called her teacher to complain, asking if the school planned to provide the rabbit. They didn't.

Fast-forward four years. My daughter was now in fifth grade, and she had begun questioning the whole Santa yarn, but she wasn't quite ready to let it go. Instead, her teacher did it for her. Now it would be her turn to write as a pretend Santa, responding to a first grader's letter. Her teacher told the class, "Of course, you all know Santa isn't real."

She came home, quite upset. We had to fess up, and I made another fruitless phone call to complain about the assignment that had twice burned my daughter, and us.

So it is with starting your own business. You have a vision about what you want, but "Santa" doesn't always deliver.

When my wife Cate and I launched Beacon Publishing, I envisioned myself as that cigar-chomping publisher, leaning back in my chair with my feet propped up on the potbelly stove, pontificating about the local issues of the day.

Yes, I actually did get to do some of that, sans the cigar and potbelly stove. And, by and large, I got my wish. In the early days, it was just my wife and I publishing the Mukilteo Beacon. She was the ad sales and business departments; I was the editorial and production departments.

After a scary first few years when we lived on a wing and a prayer, we started having some success. We bought the Edmonds Paper in 1998, then launched the Mill Creek Beacon in 2014. Of course, we had to add staff, and we've been lucky to surround Beacon Publishing with talented professionals who care deeply about our mission to be the go-to place for local news.

During this time, the landscape has changed dramatically. Social media, ie; Google and Facebook and various spinoffs, exploded on the scene, and they started sucking up all the advertising dollars that had sustained newspapers for decades. So, as we've been telling readers for several weeks now, we're implementing a new business plan based on a digital first, subscription model.

That means we're putting up news virtually every day on our newspaper websites, primarily for a younger audience that prefers to read on their smartphones or other electronic devices, but we're still printing weekly for readers who prefer a good old-fashioned newspaper in their hands. It's the best of both worlds.

We're following in the footsteps of other community newspaper publishers who have successfully taken this new road, so we're hopeful and encouraged that we'll be successful as well.

While studies show that newspapers are still a smart way for businesses to advertise because of our reach and readers' trust in us, we realize we're not going to go back to the days when newspapers reigned supreme in the advertising world. So this new business model will require a mix of advertising revenue and reader support.

That's where you come in. By subscribing to your local Beacon, you're affirming that you care about your community, that you want to know what's going on at city hall, the school district, police department and more, and that you agree your community newspaper is the best way to keep abreast of that news.

But time is running out. Starting Feb. 1, the Beacon will be subscription only. You'll no longer be able to pick up a current, free edition at a newsstand.

Subscribe today, and, as our thanks to you, you'll have instant, full access to the website now, ahead of the Feb. 1 launch. In addition, if you sign up before Christmas, you can buy a second subscription for a family member or friend for half off!

We hope you'll agree the Beacon is a must-have part of your life. That's what is on my Santa list this year. No cigars or potbelly stove, please.