Officers OK after suspect attempts to run them over; Ace a hero 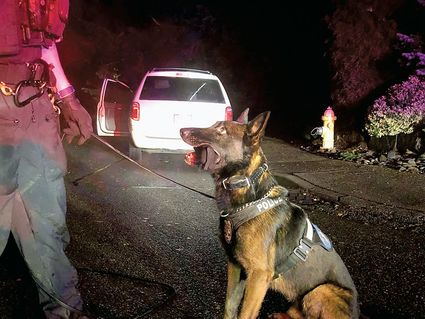 Edmonds K-9 Ace was a good boy in helping to capture a suspect.

Three Edmonds police officers are OK after two suspects attempted to run them over in their car.

A 24-year-old male from Kent and a 38-year-old female, both wanted felons, were arrested Nov. 24 after Edmonds officers were called to investigate a suspicious vehicle in downtown Edmonds.

Three officers are OK after the male suspect used his vehicle â€“ a 2004 Dodge Caravan â€“ in an attempt to run over two officers and ram two police vehicles, said Sgt. Josh McClure.

The incident started just after 10 p.m. when officers were called to the 900 block of Daley Street for a report of a vehicl...