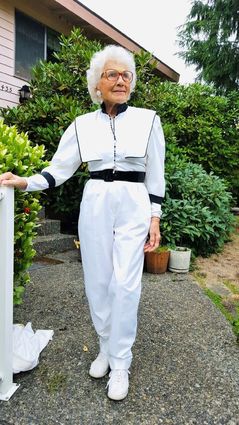 Irma Reamer Sutherland, 99, of Edmonds, Washington, died peacefully on Oct. 9, 2020. Irma was born on Nov. 20, 1920, in Batavia, New York, the sixth child of nine children, to Stephen Reamer and Mary (Loksa) Reamer. Her infectious spirit was truly one-of-a-kind, and she will be deeply missed.

Irma's boundless energy and resiliency was partly shaped by her experience growing up on a farm during the Great Depression in upstate New York. Upon graduation from Wellsville High School, she met her match in William "Bill" Sutherland, and they soon married. Irma and Bill moved to the Seattle area in 1949, where they raised three children: Patrick, Mary, and Ann-in Edmonds.

Throughout her life, Irma was known as a cherished wife, loving mother, and devoted grandmother who encouraged and inspired her family to experience all that life has to offer.

Irma's love for the outdoors took her on adventures far and wide, including skiing in Sun Valley, Snoqualmie, and Stevens Pass, sailing on Lake Union, hunting in eastern Washington, fishing at Haines Wharf on the Edmonds waterfront, climbing (she summited Mount St. Helens, twice!), tending her garden at home, and dancing at every chance she got.

She learned to golf in the 1950s and was a regular on courses around Puget Sound until just a few years ago. Through golf, she forged lifelong friendships and embarked on adventures around the West Coast, Florida, the United Kingdom, and beyond.

The family wishes to express deep gratitude to Fortuna Shiferaw and her team at Legends Living Senior Care in Edmonds for the excellent care they provided to Irma during the last year of her life.

Irma will be interred at Holyrood Cemetery in Shoreline and a memorial service will be held at a later date at Holy Rosary in Edmonds. In lieu of flowers, donations can be made in her name to National Audubon Society by calling 844-428-3826 or visiting https://action.audubon.org/donate/make-tribute-gift.