Could 1 ferry be taken off Edmonds-Kingston route?

It might be unlikely, but it's on the table, says WSF 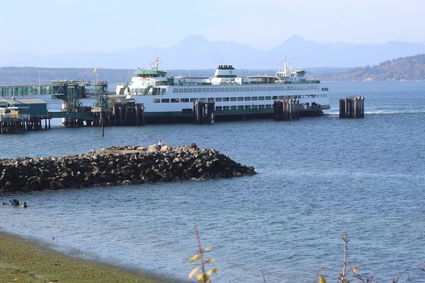 A Washington State ferry arrives in Edmonds this week.

It wasn't too long ago that there was talk of a third ferry serving Edmonds-Kingston.

Now there's another thought – cutting back to a lone ferry.

Think the lines are long now?

In late September, WSDOT submitted options to the state Office of Financial Management for a 10% budget reduction in the 2021-23 biennial budget, including $75 million in cuts across the ferry system, said Washington State Ferries spokesman Ian Sterling.

However, he said, It's important to note that none of the proposals are a reality at this point, and many will likely never happen.

"It's a laundry list of potential cuts that the Legislature and governor's office could look at if we're in a position where we need to cut tens of millions of dollars," Sterling said. "The only way to do that is hard cuts to service that would eliminate or drastically reduce routes, vessels, and employees."

It's no secret that WSF's ridership has tailed off dramatically with the coronavirus, as many former riders are working from home.

"Hopefully, with ridership on the rebound and some other factors, they won't need to be considered," Sterling said. "The next milestone is probably the governor's budget, which is still a ways out."

Here's the partial list of what was sent to OFM:

– Reduce Edmonds/Kingston route to one vessel. The Jumbo Class Spokane ferry – built in 1972 and rebuilt in 2004 – would be decommissioned.

– Discontinue Sidney, B.C., service. This would reduce the San Juan Islands by one vessel in all seasons. The Yakima would either be decommissioned and stricken from the fleet or held in service to allow an Issaquah vessel to be removed from service and renovated to achieve its 60-year expected life span. Service to Sidney is currently on hold due to the pandemic.

– Reduce Seattle-Bremerton to one vessel. The Kaleetan would be decommissioned and stricken from the fleet.

– Reduce the Port Townsend/Coupeville route to one vessel year-round. A Kwa-di-tabil class vessel (the Salish) would be de-crewed (but kept in the fleet for now).

– Reduce Seattle-Bainbridge route to one vessel. This service reduction has been partially implemented due to the pandemic. The vessel currently removed has not been de-crewed. Under this proposal, it would be.

– Reduce the Fauntleroy-Vashon-Southworth route to one vessel. Service only to Seattle and Vashon Island; eliminate service to Southworth on the Kitsap Peninsula and close the Southworth Terminal. Tillikum decommissioned and stricken from the fleet.

Alternatives to the cuts include:

– Lay up one or two Jumbo Mark II vessels. The Puyallup, which serves Edmonds-Kingston, is one of these boats. These are the largest vessels in the fleet and the most expensive vessels to operate. WSF has not evaluated the financial aspects of this concept; the vessels are the ones targeted for hybrid-electric conversion as part of Gov. Jay Inslee's plan for addressing climate change.

– Eliminate the Port Townsend-Coupeville route entirely. Restores a vessel to either Bainbridge or Kingston by decommissioning two Kwa-di-tabil vessels and closing the terminals. Use the savings to keep one extra vessel operating on the central Sound routes.

– Two-season schedule. WSF is evaluating the financial implications of moving to a two-season schedule ("high and low seasons") as opposed to the four seasonal schedules that it currently operates. (Note: At this time, WSF is still operating a reduced "winter" schedule as a result of the pandemic. Reduced means they are operating fewer vessels than normal for the "winter" schedule.

– Extend the current reduced "winter" schedule through June 19. This would only save the agency about $3.4 million. As compared to the full season schedule, any combination with the above strategies would diminish its impacts due to overlapping savings.

– Assign oilers to routes, not vessels. Currently, engine room oilers stay with the vessel's engine crew as the vessel moves about the system and into the yard for service. Assigning the oilers to a route instead of a vessel would eliminate travel and per diem charges while the vessel is away from its designated homeport. This would save about $800,000 per year and would need to be bargaining with the Marine Engineers' Beneficial Association union.

– Eliminate the Point Defiance-Tahlequah route. Eliminating service to the southern Vashon Island, de-crewing the vessel, and closing the terminals would save about $8.7 million per year.