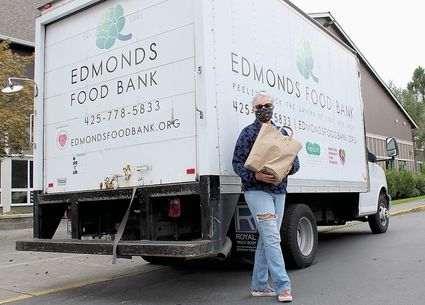 Traditionally, the Edmonds Food Bank serves about 350 people every week. That number doubled after the coronavirus took hold in March.

But the more than 300 volunteers at the food bank have stepped up to make sure that all in Edmonds and surrounding areas who need food are served, no matter the number.

That's just one reason the Edmonds Kiwanis Club's 2020 Citizen of the Year didn't single out an individual. The 27th annual honor goes to the food bank volunteers and Executive Director Casey Davis.

The food bank joins other organizations that have won the award, including the Edmonds Petanque Club and Edmonds Floretum Garden Club.

"I am truly honored," Davis said. "I think it's just perfect that it's both me and the volunteers, because they're the key to making all this work. I need an orchestra, and without them there is no food bank."

Davis said that, although the bank counts more than 300 volunteers, in September, 157 of them served 1,630 families and provided more than 175,000 pounds of food. Before the coronavirus, David said volunteers have been as young as 9. But, for the time being, volunteers must at least be in high school.

As you can imagine, the coronavirus has changed how the food bank operates. Volunteers are required to wear gloves, and no one is allowed on the property without a mask.

In addition, Davis implemented an online ordering system – you can also drive up and fill out an order – and shifted the shopping from inside to outside for no-contact pickup.

Prior to distribution days, people are encouraged to go to the food bank's website (#edmondsfoodbank.org#), click on the Get Food tab, and fill out an order form.

"We leave the food cart by their car when they pull up, then once we drop the cart off at the back of their car, they can walk to the car," Davis said. "When they leave, we take the cart, bleach it, and put it back into service."

Although the Edmonds Food Bank announced in January that it was starting a monthly outreach program for military veterans in Edmonds, that program - which involved veterans getting together – is now understandably on hold.

But the bank is committed to helping veterans in the community who need help.

"Right now we're working to add veterans to our delivery services," Davis said. "So if anybody knows veterans in Edmonds and the immediate surrounding areas who would like food delivered, let us know.

"We just got a grant from Verdant to buy a new van that we'll use for delivery. So we will get food to anybody in any area who can't get to the food bank. We want to get the word out to veterans that we would like to serve them if they need that support."

In addition, the city has allocated $35,000 of its CARES Act to reimburse those expenditures by the Edmonds Food Bank to provide food to persons in need in Edmonds by supporting the following expected expenditures:

– $7,500 to help fund an automated ordering system for delivery service to seniors, ADA clients, veterans and other COVID-impacted community members; and

– $7,500 to add shelving to the delivery van to expedite packing and disbursement of online orders.

Peggy Kennedy and Gretchen Dixon opened the food bank at Edmonds United Methodist Church in October 1981, naming it the Carol Rowe Memorial Food Bank after an Edmonds woman who ran a much smaller operation from her home.

Kennedy, the Edmonds Kiwanis' Club Citizen of the Year in 2010, died in November 2016 at age 88. She had retired earlier that year, and Edmonds-Woodway graduate Alison Cook became executive director.

When Cook left after 17 months to join Volunteers of America Western Washington, Davis was named executive director of the food bank.

As anyone who has ever worked at the food bank will tell you, the community relies on community contributions to supplement its annual budget.

At the food bank, funds will go toward more food, as donations were down markedly. It will also buy supplies and pay for helpers, if necessary. The city also helped the food bank purchase a refrigerated food truck to provide and deliver fresh food.

Last month, the food bank held its third annual Empty Bowl event to raise funds for the food-insecure. It was a partnership with Glazed & Amazed where people could buy an empty bowl to paint at the store or at home. The bowls were $20, with $16 going to the food bank.

Throughout the year, there are numerous Edmonds businesses and organizations that support the food bank, including the Petanque Club, St. Alban's Church, and the Lion's Club, among many others.

It's clear that the food bank is as needed as ever.

According to Davis, about a third of students in the Edmonds School District are on the free-and-reduced lunch program.

Davis and the food bank will be honored at a date to be announced.

The Edmonds Bank operates below the United Methodist Church – but is not affiliated with it – and is open 3-6 p.m. Mondays and 9 a.m.-noon Tuesdays. The website is http://www.edmondsfoodbank.org. 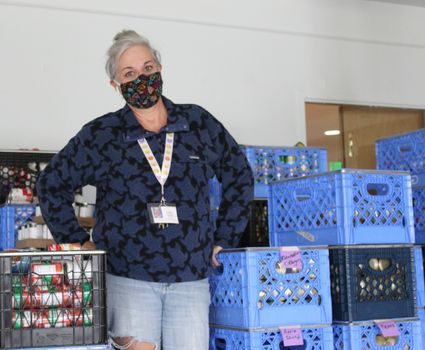