UPDATE: 3 shot in Edmonds; one has life-threatening injuries

Suspect on the run after shooting at Boo Han Oriental Market 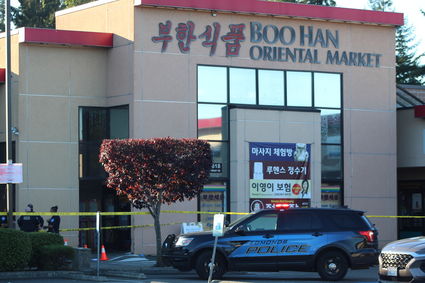 Police are investigating a triple shooting at Boo Han Oriental Market in Edmonds on Sept. 29.

Edmonds Police are searching for a suspect who allegedly shot three people – one in the face – Tuesday, Sept. 29, at Boo Han Oriental Market on Highway 99 in Edmonds' International District.

Sgt. Josh McClure said the suspect, who is armed, is the estranged husband of one of the victims. He is described as a short Asian male in his 20s, with black clothing and a dark baseball cap. He was believed to heading southbound. A drone and a K-9 officer were being used in the search for the suspect.

Two of the victims were taken to Harborview in Seattle, and the other to Providence in Everett. M...