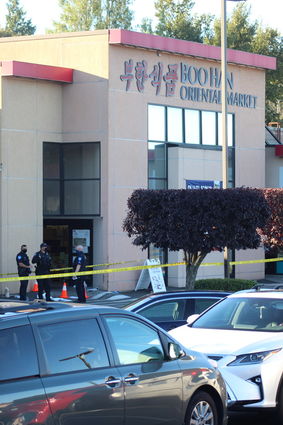 The shooting at Boo Han Oriental Market in Edmonds' International District on Highway 99 shut down surrounding roads for several hours as police searched for the shooter.

According to probable cause documents, 27-year-old Duy Phuong Nguyen was arrested for first-degree murder in the shooting death of a 20-year-old Thanh Vy Ly, who was shot in the arms and stomach. Police said she is from Mountlake Terrace.

Nguyen, being held on $3 million bail, was also charged with first-degree domestic violence assault on his 24-year-old estranged wife, Edmonds Police Sgt. Josh McClure said. Thy Tran was shot in the face, and is in serious condition.

McClure said they had only been separated for a couple of days, and Nguyen made numerous threats against her during that time.

Nguyen was also charged with first-degree assault on a 23-year-old Thien Vuong, who was shot multiple times in his legs and abdomen and was the boyfriend of the deceased woman. He is listed in stable condition at Providence Regional Medical Center.

Two of the victims – including the woman who died and the wife, who were roommates – were Boo Han Market employees.They were taken to Harborview Medical Center in Seattle.

With the assistance of an interpreter, the estranged wife told Edmonds Detective Stacie Trykar before undergoing surgery that Nguyen was the shooter and had previously threatened her and her friend, saying, "I'll shoot you."

Nguyen is a Whole Foods employee in Seattle who lived south of Howarth Park in Everett.

It was Nguyen's mother who called Edmonds Detective Julie Govantes and told her that she had her son with her, in a car, at the Everett police station. She told police he told her he wanted to die. Nguyen – who told police he wanted to turn himself in – said he had a gun in the car, which was out of bullets. The gun was a Glock pistol, according to court documents.

According to McClure, Nguyen had purchased two handguns legally, including the suspected murder weapon and one later found in a vehicle at his residence. He also had a concealed weapons permit.

McClure said the police received a number of 911 calls at about 3:30 p.m. saying several people had been shot.

At a news conference Sept. 30, McClure said the estranged wife was at Boo Han, where she worked, and the other two victims had gone to the store to speak with her and provide support.

All three victims are of Vietnamese descent.

Security footage obtained by police show that Nguyen entered Boo Han Market three separate times. The three victims eventually left the market through the south door and stopped outside in the parking lot.

McClure said Nguyen then came up behind them and "very intentionally" shot all three.

Nguyen then fled in a white Toyota. According to court documents, there were about 11 9 mm shell casings inside and outside the main door. No weapons were found.

McClure praised the four officers who first responded to the scene. All applied tourniquets and chest shields as necessary, applying direct pressure to wounds and using plenty of gauze.

The responders included a field-training officer with four years of experience, a student officer in an eight-week training program who was formerly an ER tech at Swedish Edmonds, and two officers each with only four days of solo patrol experience.

At the news conference, Edmonds Mayor Mike Nelson said, "I am sickened by the abuser who torments and preys on their family members, the innocent. In Washington state last year, 42% of all killings were from domestic violence."

Acting Police Chief Jim Lawless said, "Unfortunately, the tragic events of yesterday once again brought to light the impacts of domestic violence have not just on the victims, but the victims' families and also innocent people."

Today, Oct. 1, is the beginning of Domestic Violence Month.

Those who need help can contact the domestic violence coordinator for the city of Edmonds, Jill Schick. She can be reached at 425-275-4502 or [email protected]