Waterfront views again available to all 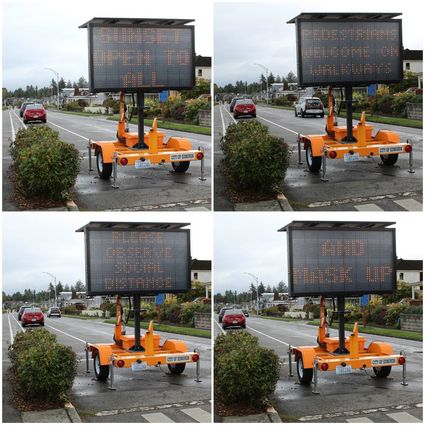 Sunset Avenue in Edmonds is again open to through traffic and parked cars.

After being closed to through traffic and parked looky-loos since April, Sunset Avenue above the bluffs opened up to all on Friday, Sept. 25.

You can park in assigned spaces again. Connect to Caspers Street and beyond. The walking path never closed, so continue with your stroll or jog.

Don't forget to mask up.

A variable message board sign will remain for at least two more weeks to remind everyone using Sunset to continue to mask-up and maintain appropriate social distances (greater than 6 feet), in accordance with current CDC, state, and county health guidelines.

As you can imagine, there were mixed feelings on the temporary closure. Many let the city know all about it.

"People liked the wider pathway, and felt more comfortable they could keep separated from other walkers in the larger space," said Public Works Director Phil Williams. "Others liked the fact it was quieter and nicer without the traffic noise. Some wanted it to be made permanent."

On the other hand, he said, there were some commenters who enjoyed it the way it was.

"They didn't like the look of the street with a bunch of traffic cones on it, didn't like the barricades, thought we had 'ruined' the atmosphere on the street, and felt sorry for the adjacent residents because it was an eyesore and compromised their views. Another comment came from or on behalf of those who are unable to ambulate very far, or at all, and who had always enjoyed driving there, parking, and enjoying the views."

In April, Mayor Mike Nelson explained why the city shut the street down to cars.

"Due to increased crowds, people have been walking in the street to maintain 6 feet social distance, while drivers are passing through on this already narrow road. With the nicer weather, increased numbers of vehicles and pedestrians were leading to a situation where it seemed like just a matter of time before someone gets hurt."

The mayor added that drivers had been parking in nondesignated spots, and at times there were so many cars that some local residents couldn't get to their driveways.