What sank the Alumaweld off Edmonds Marina?

Wife of boat owner wants to set the record straight 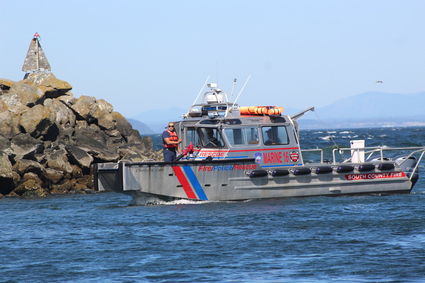 South County Fire's Marine 16 helped with the rescue near the Edmonds Marina.

The real story of a boat sinking on Labor Day off the Edmonds coast is more complicated than it first appeared.

Incomplete information from rescue officials about a "17-foot aluminum boat" capsizing in choppy and dangerous waters – throwing five people and two small dogs into frigid Puget Sound – led to ridicule from a few Facebook posters, who chided the boat's owner for taking an unsafe boat out in such conditions.

Linda Norris-Hoggarth wants to set the record straight. She's the wife of Dennis Hoggarth, whose boat it was that sank.

Importantly, the boat wasn't 17 feet. It wasn't 19 feet, as later reported. And it was not a dinghy, as some online posters suggested. The boat was a 20-foot Alumaweld Blackhawk, a welded aluminum boat with a steering column, bimini top, and an outboard motor on an extended transom.

She said she was hesitant about putting her name in the paper – she wants to put the focus on rescuers – but she has commented on the Beacon's Facebook page about the incident, and called the Beacon's office to tell her story.

Even though she wasn't onboard, she said she knows exactly what happened, thanks to her husband and his fishing partner.

According to South County Fire spokesperson Leslie Hynes, a call came in at about 1:15 p.m. Sept. 7 that a boat had sunk about 400 yards offshore from the Offleash Area Edmonds dog park on waters that started out calm but quickly turned windy and treacherous.

Here's what happened next, according to Norris-Hoggarth.

Dennis Norris had checked marine conditions before setting out from his Camano Island home, and departed from the Everett Marina for a fishing trip, heading south. On board was his daughter and her husband and their 14- and 22-year-old daughters, who brought two small dogs along with them.

Norris gauged the weather conditions when the winds started whipping, and decided to return to Everett.

"He is very much aware," Norris-Hoggarth said about her husband, who has 55 years of experience on the water. But he couldn't do anything with what came next.

"He turned to (head back to the marina), but a big wave came in and hit, and before that was done, another one hit. They said it was a freak wave. They fought it; they weren't just sitting out there."

Luckily, another boater came upon Norris and his four passengers (and the two dogs) floating with their life vests on. "My husband says he never allows anyone on his boat without a life vest," Norris-Hoggarth said.

All were taken to the Edmonds Marina, then to Swedish Edmonds hospital.

Another rescuer, Steve Bodine, scooped up some of the debris left by the boat, Norris-Hoggarth said. Still another, Antonio Cruz, picked up some of the items floating on the water, and was later put in touch with Norris to give them back.

We left Everett the morning of the 7th at 0500. We have a 24-foot North River offshore fishing boat. When we left the Everett marina, conditions were ideal, and the water was flat and calm.

We went up to Port Townsend and checked a few spots. By 0900 we decided to head down to Edmonds. We began fishing in front of the Edmonds Marina and the oil docks just before 1100. The wind had begun picking up from the north as we headed south.

By the time we reached Edmonds, there were whitecaps throughout the Sound, and the waves were around 4 to 5 feet. As we passed the oil docks, we picked up two coho. Our intention was to drift the shipping lanes down to Shilshole.

This isn't something you hear every day. I haven't heard a radio transmission this disturbing since I was in Iraq in '03. We immediately pulled our gear and headed north.

As we approached the oil docks, we began seeing debris. We pulled in a jacket, some plastic totes, and a bucket. There was also an oil line streak across the water. We called our findings into the Coast Guard, and they told us to stay put.

(South County Fire) and a towboat showed up within minutes. About that time, we noticed the ferry had turned and was facing south. Later, we had learned the ferry had picked up (some of) the folks.

After the Beacon posted its initial story on the sinking, along with some pictures, readers quickly posted comments on Facebook thanking rescuers and saying they were glad all survived.

But then came some speculative comments, including that the boat shouldn't have been out in the water under the conditions on Labor Day. One said the boaters "were asking for it."

One who tried to correct some of the comments was Michael Navarre, Norris' frequent fishing partner.

"First, it was a 20-foot boat that is fully capable of carrying five people," Norris said. "Second, the operator checked the winds on two different sites, which forecasted max gusts of 13 knots. Those winds are easily handled by a 20-foot boat."

When the winds picked up, Norris pulled up his fishing gear and headed toward the Edmonds marina.

"Unfortunately, on the way, he encountered rogue waves that went over the top of the boat," he said. 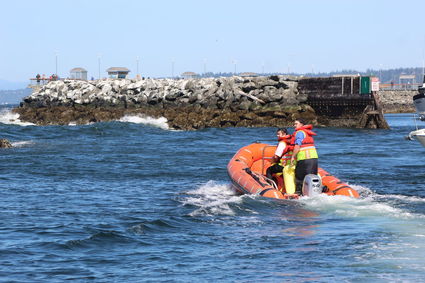 A Washington State Ferry rescue boat leaves the Edmonds Marina after dropping off a passenger from a sunken boat.

"Other boaters verified that. Personally, I think he encountered a bar-type effect. He did everything right. He checked the weather before leaving. They were all wearing life jackets. He picked up his gear when it started getting rough, and headed to shore. ...

"I find it sad that people will make hurtful comments when they don't have all the facts, and obviously don't know the capabilities of smaller boats."

Said Norris-Hoggarth: "There's some cruel people in this world. But my husband, I would put him up against anybody out there when it comes to the water. Even his fishing partner said there's times when he doesn't have a life vest on, but he's never seen my husband without one on."

She said she hasn't received much in the way of answers as to whether her husband's boat will be retrieved. It's in pretty deep water.

She knows one thing, though.

"He will have another boat one day."