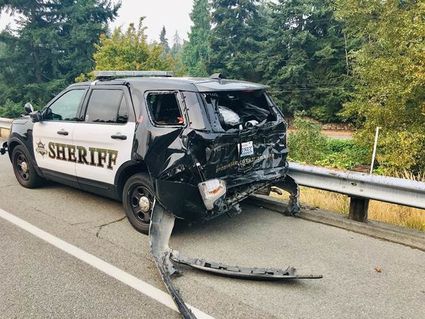 According to the Snohomish County Sheriff's Office, at about 10 a.m. a 28-year-old Everett man was arrested after stealing a vehicle, hitting numerous occupied vehicles, leading deputies on a pursuit into King County, and intentionally ramming a deputy’s patrol vehicle.

"My mom was walking her dog and luckily chose not to cross the street when a flatbed truck with what looked like a small cement mixer on the back bed sped...

On the positive side, here in town people emerged from everywhere. It looked like there were at least a dozen people calling 911. The police officer was quick on the scene, and brought a sense of calm as he quickly assessed the situation. Not long after the fire department showed up with a truck and an ambulance and calmly started to engage. An older women helped calm down the little kid in the back seat, who stopped crying and seemed to calm down a little. Others came an offered help. What it felt like was suddenly in that moment the Edmonds community coalesced to help with this potential tragedy. In that moment there were no Republicans or Democrats, there was only Edmonds caring for its own.