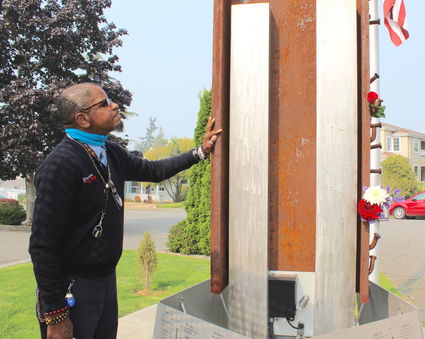 Although there was no in-person ceremony at the 9-11 Memorial in Edmonds due to the coronavirus pandemic, visitors made their way to the Edmonds Firefighters Memorial Park throughout the day to pay their respects.

Hunter Jernigan, who lives in Northgate, stopped by in the early afternoon before his shift driving a bus for King County Metro. He said he makes it a point to visit a 9-11 memorial every year, which has included the Kitsap 9/11 Memorial in Bremerton and South King Fire and Rescue 9/11 Memorial in Federal Way.

Jernigan said he had two cousins by marriage who died in the Twin Towers and a first cousin – who survived – trapped in the city on that fateful day.

Jernigan hasn't made it back to the 9-11 memorial and museum; he said the last time he visited the site was a few years after the 2001 attack.

South County Fire created a virtual video in honor of Sept. 11 victims – which included many firefighters, police, and other first responders, on its Facebook page.