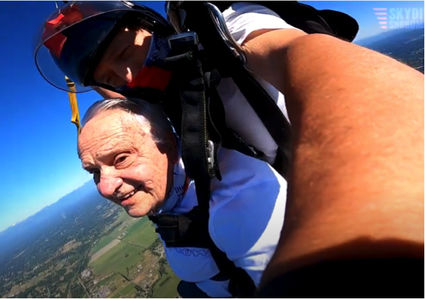 James Thomason, 90, of Edmonds, WA, passed away August 12, 2020. He will be buried at the Tahoma National Cemetery.

Jim was born on July 27, 1930. He was the son of James Marshall Thomason and Bess Woodard. While he moved between Kansas City and Chicago many times in order for the family to find work during the Depression and war years, it was Kearney, MO that he called home. His family owned a farm there and he graduated from Kearney High School.

He was an air traffic controller in the US Navy during the Korean War.

On June 1, 1956, he was united in marriage with the love of his life, Lorine Anna Aversman, who preceded him in death on January 27, 2014. They lived in Mt. Prospect, IL, for 35 years before moving to Lee's Summit, MO, for 10 years. Finally, they moved to Edmonds in 2012 to be close to their daughter, as Lorine's health was failing.

Jim lived his life to the fullest! He was generous with his time, his efforts, his money and his affection. He lived with kindness, and in his later years said, "I don't know how many more chances I have to do something nice for someone else."

His faith in God showed through his life. His favorite birthday of his life was his 90th, when he went skydiving for the first time.

His family and friends will carry his beautiful example in our hearts and lives until we are all together again.

Jim prioritized two charities: St. Jude's Children Research Hospital and Bethany Community Church, Seattle. The family requests any donations be sent to the James E Thomason Memorial Fund at either of those organizations.