All about the crow in Edmonds 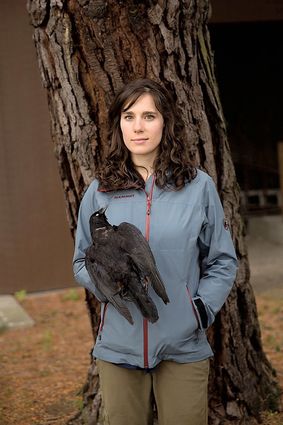 Kaeli Swift: "My favorite part of the research is being able to talk to the public about it."

Love them? Hate them?

Either way, you have to admire them for their intelligence, their stark beauty, their badass-ness.

Kaelii Swift admires crows so much she's made the member of the genus corvus her life's work. The renowned crow and raven specialist is the keynote speaker for the 16th annual 2020 Puget Sound Bird Fest, which – no surprise – will be held online Sept. 12-13.

Swift will kick off the festivities 10:30 a.m. Saturday, Sept. 12, with a live interactive webinar called, of course, "Something to Crow About."

Swift said she'll talk broadly about crows, addressing common questions about their biology. She'll also emphasize the most frequent questions people have about these birds, including play, tool use, and communal roosting.

There will be a Q&A after the presentation.

Swift will spend some time detailing her research as a former graduate student at the University of Washington, where she earned her doctorate.

One topic: The interesting and complicated ways crows respond to dead members of their species.

"In our studies, what we saw was that they typically put out an alarm call, which attracts other crows in the area to check out what's going on," said Swift.

"I would not at all be surprised if at least some of your readers have had that exposure. What does that tell us about why other animals seem to respond strongly to death or what it doesn't tell us? It opens the whole door of cool questions about that."

One of the many admirable crow traits is their intelligence and street savvy. And their memories are exceptional.

"Crows absolutely have good memories for people," Swift said. "And that can be positive or negative memories, so they remember people they really like."

"But they can also remember people that they don't like. A really common experience – people, maybe when they were kids or even adults, will get aggravated at the crows for some reason, and throw a rock at them or something like that. Moving forward, they're like, man, whenever I leave my house, the crows would freak out and follow me.

"And that is what's happening. They didn't appreciate that, and marked you as a threat. But at the same time, a much more common experience comes during the breeding season, which kicks off in about March and peaks in June and July. There are a lot of baby crows around, and the parents are quite protective of them. And so, in that situation, sometimes people will get followed, or scolded, or dive-bombed. But it's an indiscriminate, 'You're close to my baby and you may not even be aware of it.'"

When Swift speaks to groups, the question of what to call a group of crows comes up.

A widely used term is "a murder" of crows.

"OK. It is true, but at the same time, the thing to kind of bear in mind is those terms, a murder of crows, the flamboyance of flamingos, are all colloquial terms. So you won't see me referring to a group of them in a talk or paper as a murder of crows."

But how that term came about is certainly associated with death and dark times in history.

"I wish I had a greater sense of the etymology of that term," Swift said. "I don't exactly know where it originated, but certainly in Western cultures. But part of the reason I love crows is because they are one of the most widely distributed groups, and a good thing to kind of bear in mind."

What we see here is, of course, the American crow. But in Japan, for example, residents see carrion and large-billed crows. So because crows – and their corvid cousins, the raven – are so widely distributed around the world, human cultures have for eons incorporated them into their mythology, their folktales, their religion.

Which is why, Swift said, it's important to remember that the way Western culture perceives crows may not be representative of how all cultures view them.

Especially during the Plague, which ravaged Africa, Asia, and Europe in the 14th century, and killed an estimated 50 million or more people, and also during the crusades – extending from the end of 11th century and continuing through late in the 13th – any period of time where you had mass human casualties in Europe, those casualties would attract scavengers.

"Getting eaten by other animals was not a way that, as Westerners, we typically like to see our dead disposed of," Swift said.

"But in some cultures, that's the way you went out. But not so much for us, and so that really seemed to be one of the main sort of turning points where we decided we really didn't like (that aspect of crows)."

That's understandably where some of that negative connotation of crows originated.

One of Swift's favorite anecdotes centers on the fact that before the Plague and Crusades, crows had long been associated in European cultures with death.

"But it wasn't usually a bad thing. It was really helpful, kind of like heads-up, where if you saw crows sitting outside your window, you might suspect that your time was near. That was a helpful sort of indication that you better get your affairs in order and make peace with God. It wasn't until later that (crows) became a bad omen."

As a regular speaker, Swift said the coronavirus pandemic has affected her life, as it has everyone else's. Online presentations are just not the same.

"My favorite part of the research is being able to talk to the public about it," she said.

The pandemic has also affected her pocketbook.

"It's been a huge hit," she said. "I've probably lost about $5,000 in speaking fees. When COVID first happened, I not only had one-off talks (to present), but also in-person courses I was slated to teach."

But there is another side to the pandemic's effects.

"While it's different now, there's a lot of advantages. It has been lovely to be able to have people from all over the country, and sometimes even all over the world, finally attend my talks, because I have a pretty robust online community. I'm active on social media. I regularly get folks in Australia or (elsewhere) saying they wish they could come to a talk.

"For a variety of reasons, it's probably not going to happen soon. But now, these talks are way more accessible. Or people have mobility issues, which would maybe make it hard for them to attend in person. So there's been some very real drawbacks, but it has been fun to be able to bring these talks to a much wider audience."

Online presentations and activities will be spread out throughout the Puget Sound Bird Fest weekend.

Other festival favorites such as the Kids Corner and a Birders' HelpDesk will be available online. Video-based virtual birding tours featuring some of our local hotspots will be available for viewing, and the Pilchuck Audubon Society plans to host a native plant sale at the Edmonds Wildlife Habitat and Demonstration Garden on Sunday.

The Bird Fest is free, but registration is required. For the latest information, go to http://www.pugetsoundbirdfest.org or email [email protected]